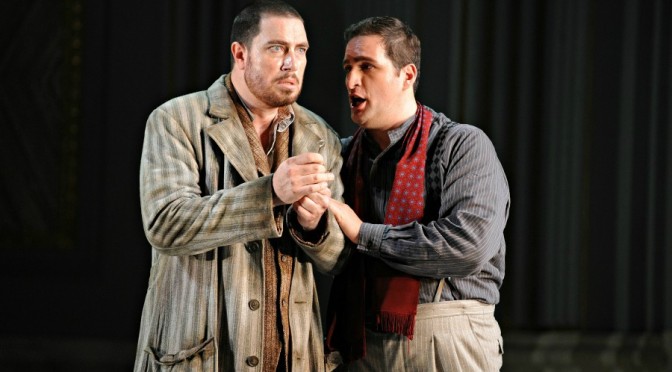 Opera Australia has pulled out all the stops in this thrilling revival of the rather controversial version of Puccini’s TOSCA as directed by John Bell. The production was first seen in 2013.

Musically and vocally, this production is fabulous. The Australian Opera and Ballet Orchestra under the baton of maestro Andrea Battistoni play superbly.  At a couple of points one could hear hints of Puccini’s Madame Butterfly, Turandot and La Boheme,– sometimes starkly dramatic, at other times lyrically passionate. Curly haired, dynamic Battistoni conducted energetically yet also with precise attention to the swirling, passionate melodies.

This unsettling, confronting revival sees the narrative transposed to Rome in the 1940’s, with the Nazi occupation in full and deadly swing. Death, guns and violence are everywhere.

The predominant visual shade is black or grey with some starkly dramatic reds.

Special mention must be made of Michael Scott- Mitchell’s more than wonderful opulent Baroque church set design for Act 1. Act 2 is far more sinister with Scarpia’s office dominated by a long table, large windows and huge Swastika banners. Act 3 is yet even darker with a massive staircase and barbed wire representing the interior of the prison camp.

The three leads are sensational and vocally superb. As Floria Tosca, South African guest star Amanda Echalaz is sensational,– a riveting actress and singer. Echalaz is beautifully costumed, her Act 2 gown is magnificent. She is every inch an opera diva with a creamy, pure, top range. Her voluptuous, soaring soprano shimmers with emotion.

She plays a kittenish jealous minx, charming and delightful. She is a strong, determined, passionate woman out to save her lover. Echalaz’s duets with Cavaradossi are fabulous and her torn, pleading Vissi d’arte, full of fear and anguish, brought the house down

As Cavaradossi, our tormented painter hero, terribly handsome tenor Riccardo Massi is in excellent voice. His major aria in Act 1 Recondita Armonia is beautifully sung and his passionate letter aria E Lucevan le stelle in Act 3 was marvelous, leaving some in the audience teary.

In Act II, Cavaradossi’s fiery defiance of his captors includes tearing down one of the Swastika decorations, which was later used by Tosca to cover the dead Scarpia (a deft use of the crooked cross in place of the standard crucifix).

As sinister, Iago-like cold, malevolent Baron Scarpia, Claudio Sgura is brilliant, showcasing a spine tingling bass. He is malicious and takes what he wants whenever he wants it. Implacable and menacing, his explosive volcanic impulses are barely controlled and hidden. His cynical , hypocritical leading of the Act 1 finale is thrilling.

In Act 2 he molests the only woman officer present and no one tries to stop him. Scarpia is portrayed as a bullying, lecherous man in the prime of life and power who fully believes that pleasure and domination by fear and pleasure are his by right. Sgura’s towering height adds to his menace, and his lean, virile stature significantly heightens his sexual menace. Rome shivers and trembles with fear.

Another excellent, imaginative piece of staging happened during the introduction at the beginning of Act 3 where we see a number of yellow-star-wearing Jewish people managing to bribe their way out of prison just in time – or do they?!  The shepherd boy aria was well placed here.

This was traditional opera at its very best.