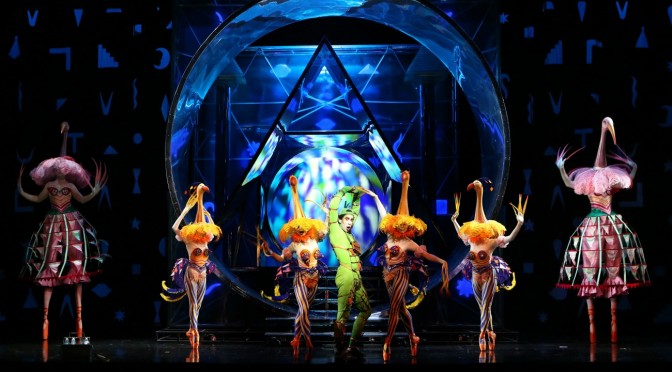 Mozart and librettist Schikaneder would love the transformation of their shifting dramatic epicentres and colourful characters in this production. The hyper-realism of tensions between the powerful Queen of the Night and the order of enlightened initiatives and priests is emphasised by Julie Taymor’s puppetry design and layered costumes.

Taymor’s notoriety as the creative who worked on Disney’s The Lion King precedes her. Trademark elements of costumes with body extensions and elevated puppets work well with this story and our modern exposure to all media and live shows.

George Tsypins’ set design could be at home in a Marvel Comic movie or Dr Who episode. A massive rotating perspex cube accommodates the changing environments well. It is often shrouded by fabric illuminating masonic iconography, suggesting the order to which Mozart and Schikaneder belonged and celebrated in this piece.

The music and direction of the characters thankfully does not suffer at the hands of a ruthlessly scintillating stage presentation. At all times conductor Anthony Legge ensures the direction and momentum is kept keen. Familiar musical passages, ceremonial soundtrack and vocal fireworks delight.

Emma Matthews gives us the thrilling arias we are waiting for. They will delight those hearing them for the first time. The high notes are focused, juicy and fiercely unhurried from Matthews. Her tortured expressions and movement are like an evil Queen from an animated classic.

Taryn Fiebig’s Pamina is suitably youthful, loyal to her erratic mother and looking for love. Vocally there are fine moments of register shift and gently golden high notes emphasising the ideals of strength, patience and purity.

John Longmuir as Tamino is vocally and physically energetic and engages us quickly. His partner in Pamina-rescuing, bird catcher Papagano, played by Samuel Dundas, just as quickly becomes a crowd favourite. So too do the spiraling bird puppets on poles often accompanying his path. The Three Ladies and Three Spirits are sung with seamless blend. Their costuming and headgear command any space they enter throughout.

This friendly and selfless Papagano just wishes to relax with some wine, family and find a mate. This is a perfect sentiment for Sydney in summer. It reminds us that genuine, simple moments are possible and are to be treasured. Forget rivalries, fury and violence in the world and content yourself with music’s magic and a chance to see a quality production of opera.

THE MAGIC FLUTE is sung in English with surtitles, running time is two hours ten minutes with interval. The season plays at the Sydney Opera House until January 30.