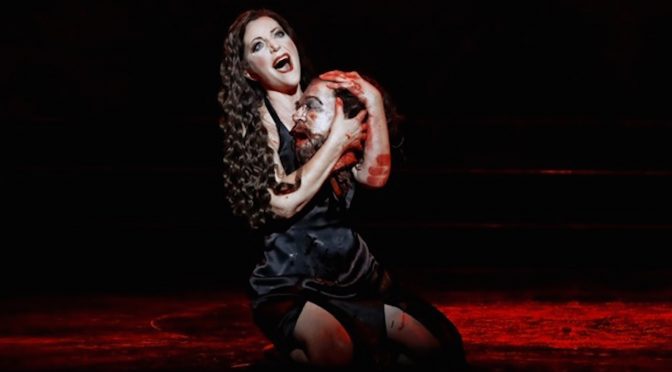 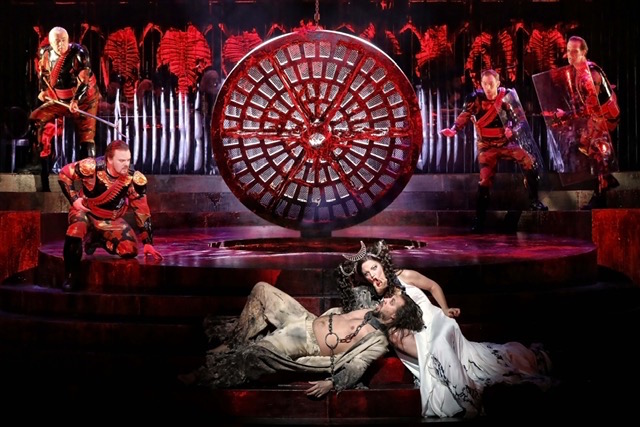 A visually stunning and musically riveting version of Richard Strauss’ Salome is now playing at the Sydney Opera House’s Dame Joan Sutherland Theatre. Opera Australia’s revival of this 2012
production is a compelling modern romp. The quality creative team and cast deliver a slick and penetrating performance event to us on a scintillating platter.

Presented without interval, this focussed tranche d’opera is an attractive package for all assembled. Vivid set design from Brian Thomson works very well with John Rayment’s relentlessly excellent lighting so the scandalous, self-centered and seedy world of Herod, Herodias and the manipulative young Salome are appropriately packaged.

There is a captivating rear tapestry with repeated full body x-rays which respond in savage mood-ring-like lighting sequences to reflect the manipulation of the sacrificial beast or prophet and the hysteria levels of other cast members. From a steamily lit cell comes John the Baptist’s voice foretelling the arrival of Jesus Christ to help the Tetrach Herod and other lusty punters repent.

The conflicts of faith, behaviour and persecution or imprisonments various on this layered stage set for this Biblical tale are many. This opera requires a troupe of fine character actors to satisfactorily
depict the predicament of all trapped dramatis personae from Oscar Wilde’s play.

Opera Australia’s version is not wanting in this regard. Even the mute moments of movement and curiosity depicted by the slaves and guards around the cell and Salome are fleeting moments
brimming with expression.

The infamous dance of the seven veils demanded by Herod of his step-daughter Salome is given a modern boost thanks to the innovation of choreographer Kelley Abbey, continued lavish and tongue in cheek costuming from Julie Lynch and a big salute to recent pop culture and fetish icons. The dance styles include pole dancers and acrobatic aerialists thrill. A favourite twentieth century movie star celebrity and special interest sex outfits are also tangled up in the stage drama as  fitting caricatures for Herod’s dwelling.

The successful stage chemistry is gilded not just by suggestive outfits but a realisation of Richard Strauss’ challenging vocal score and pointed German translation of Wilde’s play. Conductor
Johannes Fritzsch leads the Australian Opera and Ballet Orchestra in a compelling and bold delivery of the musical emotions throughout, from the tiniest motif to broader utterances.

Lise Lindstrom’s command of the stage, the music and facets of her character saw her work as an unfailing triple threat opera superstar. The crowd supplied primal cheers and applause at the conclusion at a fitting level for Salome’s demonstrated bloodlust.

The hero’s applause Lindstrom’s powerfully diverse tone and characterisation received rivalled any Australian sporting hero’s sideline screaming of fans. And rightfully so, as her chillingly athletic performance is not to be missed.

In the role of Herodias Jacqueline Dark’s beautiful timbral depths combine with cheeky and confrontational movement around the set swathed in wonderful colour. Andreas Conrads gives a lively performance as the failed lecherous King Herod in degrees of emotional and physical deshabillé as he struggles with the prophet, his women and his higher compulsive power. All crowned with a somewhat whimsical gold headpiece.

When either de profundis off stage or chained before us, Alexander Krasnov as the prophet Jokanaan’s vocal strength above the rich orchestral layer haunts us. His ensemble interactions are full of otherwordly mysticism and he moves as one whose cause can’t be silenced even if he is decapitated at the angry whim of a teenager imprisoned in a strange adult world.

This is a darkly sensual and exciting piece of theatre from which you just can’t turn away. Its compact length, visual packaging and directness make it a perfect vehicle to celebrate or introduce opera for us in a modern audience as a completely relevant and powerful way to be entertained.