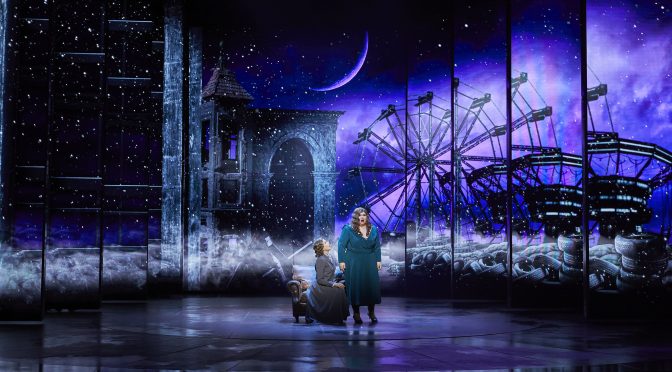 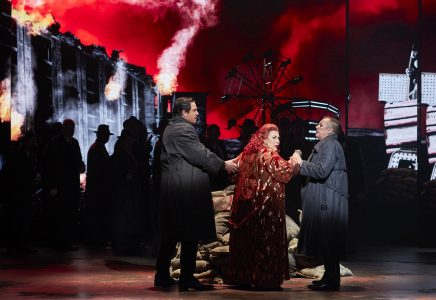 Currently playing under an operatic Big Top at Sydney Opera House is Verdi’s Il Trovatore  as you have never seen it before.  This production leaps out at us from the stage, offering a visual buffet with considerable wow factor for regular and new opera goers to feast upon.

With Italian creatives at the helm, namely Gio Forma (set design) and Gianluca Falaschi (costume design), and the striking  pageantry of  D-Wok’s digital content, this is a vivid,  busy and striking event.

This new concept morphs Verdi’s tale of the troubadour, gypsy and nobles into the setting of a dark, steampunk circus pitted against a quasi secret service and mafia blend mob.

The progressive set signposts the presence of protagonists or themes by flanking the action with sideshow or carnival-like billboards. On these, swaying, grotesque imagery and titles in the style of tarot cards used by fortune tellers give the action emphasis 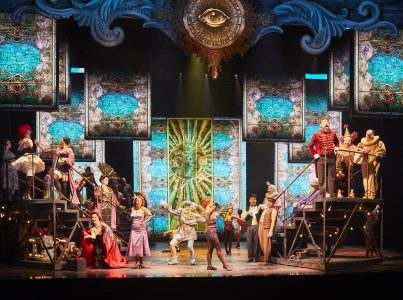 The mind-juggling and aural as well as ocular acrobatics needed for processing this new vogue opera look is a definite challenge. Harnessing all the visual stimuli whist reading surtitles and relishing some very famous musical moments makes for a busy time.

The moving digital set panels overwhelm us with beauty of landscape, colour, texture, and a layer of tropes on an extra, new, non-traditional level. The content intends to shock as well as enhance, make us shiver as the sets move, morph, pop and drench the senses. The effort is worth it and well rewarded, however.

Whilst not for the faint-hearted, the traditionalist or the non-multitasker, the production bristles and never looks back following the pre-action set complete with gypsy eye glaring at us from the proscenium arch’s centre top.

The screen shape shifts and unfolding of expansive background vistas often switch with flame or smoke-like electronic fades  to mirror the narrative of Azucena’s revenge on the nobles of her mother being burnt alive for witchcraft. 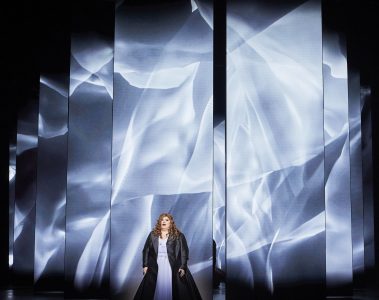 Any version of this opera, with the macabre backstory of babies mixed in a revenge murder and burning bodies needs more than just exquisitely innovative packaging to succeed.  In the principal cast we have quite an acrobatic and diverse vocal troupe to jump through the hoops of Verdi’s undulating soundtrack.

This soundtrack is keenly delivered with kaleidoscopic subtleties as well as expert ebb and flow from conductor Andrea Battistoni. There is fine support from the orchestral layer for the soloists. This version excels with some consistentlyrewarding  small ensemble moments as well as the familiar choruses.

To describe the individual chorus vibes and appearance one can think here of a jarring juxtapostion of trench-coated mafioso or secret service men and then a horde of cheeky zirkus xenophobes. And we can rejoice that Verdi’s soundscapes and narrative musical spot shows survive the comprehensive update.

Amidst the stage busy-ness there are poignant subtleties of direction and director Davide Livermore with assistant director Shaun Rennie must be congratulated for this evocative clarity. The principals benefit from this guidance. so too do characters within the circus or ‘carni’ crowd as they perform many acts of mute commentary. A touching example at the tragic conclusion is a top-hatted troupe member reaching out an inquisiitive hand to the body slumped in the stage’s centre.

The vibrant, variegated tableaux of the two main chorus troupes have also been well blocked around the stage and before the set  screens, which is no mean feat. The Miserere scene is chillingly presented with ensemble in dim litght and facing the rear of the stage.

Leah Crocetto delivers her diva material especially in the Miserere scene and surrounding opera smash-hit songs for her character of Leonora. Throughout,  displays  fluid, flexible and controlled vocal excellence, seething with the changeable complexities of her character.

Another fine characterisation with a broad vocal palette to match is Elena Gabouri as a consummate gypsy, namely the rebellious, tortured Azucena. Her vocal dips into a rich lower register for any length of time are thrilling, as too are costume designs to bring this character to bold life. 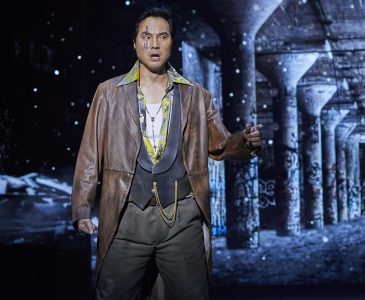 Above : Yonghoon Lee in the role of Manrica. Detail of a photo by Keith Saunders.

Yonghoon Lee as the gypsy/noble Manrico delivers his role with engaging lyricism and believable chemistry on stage which sees him succeed dramatically with chorus and fellow principles alike. Lee’s easy, mellow cantabile pleases and his ensemble singing as well as nicely carved out solo contours boost the verve of the story.

Singing with contrasting boldness and being equally buoyant in music pitted against the chorus as with other protagonists is Maxim Aniskin as Count di Luna. His duet with Leonora when she attempts to save Manrico is a fitting vocal duel with suitable menacing heavy dramatic tone from this baritone.

His earlier aria, Il balen del suo sorriso, fearing his loss of Leonora to the convent and taking her further from his heart, is a penetrating spot number for cavalier baritone.

Other highlights of casting here include great energy from Ruiz (Ian Henderson). Also the distressed attendant Inez  (Sian Sharp) who worries over the future of the lost, heartbroken Leonora mokees and speaks in efficient caricature.

This production speaks, chants or protests with a unified forward- looking voice.  It gifts us a new look  with the same old Verdi excellence of creeping eloquently towards a savage climax. Whether you are a fan of learning how to negotiate the plethora of inputs  the digital set concept demands or not, this version definitely entertains.

We don’t need a Romany crystal ball to help us know that this tricky version with changed-up production will remain in our hearts and become another lush part of the Opera Australia digital-set canon.

A trailer for the current Opera Australia prodution can be viewed at:  https://www.youtube.com/watch?v=URiIr1qP5O0