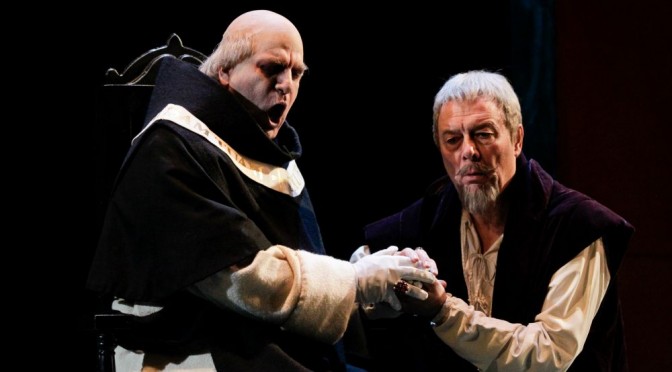 This production of Don Carlos is the 1884 four-act version and is an extremely impressive revival of the magnificent 1999 Elijah Moshinsky staging. It is the biggest production by Opera Australia since the recent Ring Cycle in Melbourne and at one point features over two hundred people on stage.

Musically it is glorious with outstanding singing and superb playing by the orchestra under the impassioned baton of maestro Andrea Licata which acknowledges and respects each note of this complex, difficult and long score (listen out for the Flamenco influences) and simultaneously allows the work to ‘breathe’ and become intensely dramatic.

The incredible austerity and stifling, rigid formality, the conflict between church and state, the boiling, hidden, intense passions and the barely hidden wretchedness behind the dazzling grandeur of the court of Philip II of Spain is depicted with amazing faithfulness.

There is a large Velasquez influence in the designs. ( How some of the women manage to move in their extremely corseted and restrictive costumes I just don’t know). Designer Paul Brown’s looming, at times chillingly oppressive sets were tremendous and aided by Nigel Levings’ terrific, atmospheric lighting. There is perhaps some respite from the gloom in the garden scene when the ladies have fun singing the Moorish song, but not much ,and the auto da-fe scene- the burning of a heretic- with its huge crowd is chilling and hypnotic.

The six main leads are superb. We are treated to a glorious vocal feast rarely heard and surpassed.

Diego Torre’s amazing performance of the eponymous Don Carlos was gloriously sung with an impressively commanding ringing tone, inspired and revealing hidden depths of a character who can so often become drowned in his own misfortunes and misery.

Jose Carbo, as the handsome, dashing libertine Rodrigo Posa, Don Carlos’ best friend, was played just as passionately and was a wonderful match for Torre in their celebrated duet.

Giacomo Prestia​’s tall, thin unhappy King Philip was outstanding too in his performance- cold and authoritarian, yet vulnerable. And what a spectacular appearance in the glittering gold armour and crown– he looked like a mythological storybook king.

Prestia’s melancholic solo that opened the second half in which he laments the Queen who doesn’t return his love, was stunning and simply brought the house down.

David Parkin as the monk (Charles V) came across as ghostly with his unearthly pallor. His eerie, spider like entrance that opens the show, with its ominous shadows , is another spectacular moment in this production.

Victoria Yastrebova​, as the unfortunate, trapped Queen Elisabeth de Valois, was vulnerable and affecting, and was in superb voice in the famous Act IV aria,’Tu che la vanita’.

The beautiful yet deceitful and treacherous Princess Eboli​ was splendidly sung by Milijana Nikolic​, jealous, seeking revenge and carefully guarding her power.

Mention must also be made of the page Tebaldo, a ‘trouser’role delightfully played by Anna Dowsley.

All in all, this was a dark, inspired and tremendously performed work.

Verdi’s DON CARLOS runs at the Dame Joan, Sydney Opera House on various dates in repertory  until the  15th August 2015