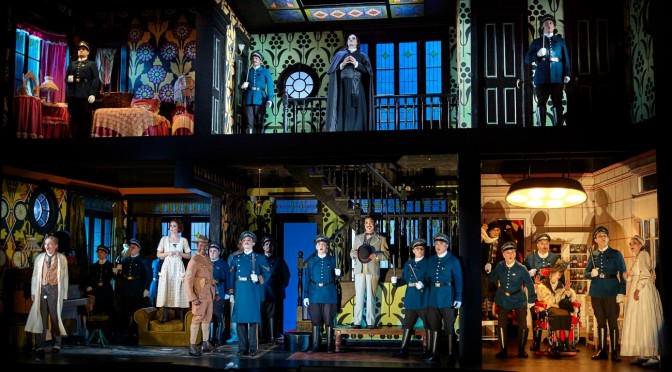 Opera Australia’s production of THE BARBER OF SEVILLE which first appeared in 1995 makes a joyous and energetic return.

The environs of the Dame Joan Sutherland theatre are themed with displays of paraphernalia relating to the traditional barber trade. In the popular culture of our time, full of images of moustaches and slick male grooming, this event design and production styling resonates well.

The musical treat in store is indicated by conductor Andrea Molino’s extremely clean and crisp rendering of the overture with the Australian Opera and Ballet Orchestra. The music has a colourful and character-filled momentum with enjoyable knife-edge shifts in nuance. The equally sensitive fortepiano accompaniment contrasts nicely with fuller orchestral textures is as it allows the characters to hatch their plans in recitative.

These are plans which the well-directed comic opera ensemble hatch at an engagingly hectic pace on the elaborately designed stage. With suitable vocal skill and an impressive physicality the cast breaks down any negative stereotype and untruth about opera being a static art form for entertainment or storytelling.

This story is a prequel to the tale set in Mozart’s The Marriage of Figaro, which provides commentary on the ambitions of acceptable and unacceptable love. The Beaumarchais story describes deception, trickery, disguises class connections and highlights hubris.

Much is the same in THE BARBER OF SEVILLE. Figaro, the resourceful barber and matchmaker assists Count Almaviva woo the feisty Rosina away from the home detention of her repulsive guardian Dr Bartolo. Bartolo plans to marry her. Rosina has other ideas. This cast devours the ridiculous and situational comedy elements of this story.

Rossini’s score full of swift patter singing bristles with energy. Such writing scored for baritone endears Figaro (Paolo Bordogna) to the audience early on in the opera. Bordogna proves himself to be the consummate craftsman and entertainer.

In brightly striped blazer Bordogna is stunning during the famous and fiendishly difficult aria Largo al factotum (‘Make way for the handyman’). Ensemble members also heighten the characterisation and salon feel during this aria in the front of a stage curtain designed with caricatures of coiffes various.

Count Almaviva in his four disguises for wooing Rosina is played throughout with great contrast by Kenneth Tarver. His comic timing is precise and he is the master of a good entrance. Tarver’s undercover courting scenes extend each persona through to the finest gesture. His bel canto tone delights in the Act 1 serenade Ecco, ridente in cielo (‘Here, laughing in heaven’).

In this opening the Count sings before a miniature version of a house-lined street in Seville, complete with miniature people. The set design by Michael Yeargan continues to thrill us theatrically. The remainder of action takes place in a clever cutaway-house set which both condenses and magnifies the energy on stage.

Dr Bartolo’s house and surgery fill with the hectic comings and goings of the principals and ensemble. The servant Ambrogio (Samuel Dundas) and housekeeper Berta (Jane Ede) add impressive presences and scene-stealing mute performances to many moments. The silent movie-inspired aspects in Elijah Moshinsky’s version present us with many recognisable character styles, and some excellent detailed 1920’s styled costumes designed by Dona Granata.

In this composite set, the room on the right belongs to the trapped Rosina (Anna Dowsley). Another cast member with relentless energy, Dowsley makes the most of any comic opportunity, exclamation and visual gag.

Dowsey works her way through the set like a bird trapped in a cage; she is a bird with a true voice and unstoppable spirit. Her solo and ensemble rendering of Rossini’s conversation and rollicking repetitions is unflagging. The Act One double aria Una voce poca fa (‘A voice a while back’) is an example of clear measured tone and facility without over-excessive fireworks in the sections of demanding development.

The cast is well balanced with the vocal depth and strength of character provided by portayals of Dr Bartolo (Warwick Fyfe) and music master Don Basilio (David Parkin). Parkin’s initial entrance is melodramatic and spectacular. Together they depict a pair of suitably skewed characters to be spectacularly derailed by the handyman Figaro and the triumphant tutti.