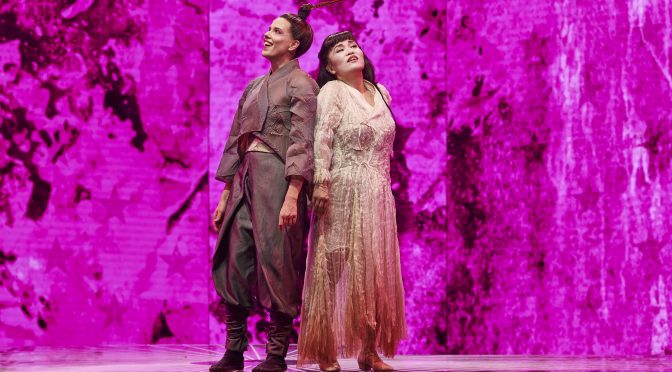 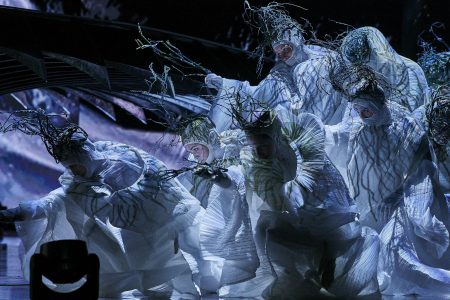 Above:  Members of the Opera Australia Chorus perform the humming chorus from Act Two. Featured Image : Sian Sharp as Suzuki and Sae Kyung Rim in the role of Cio-Cio-San. Photo Credit: Guy Davies

Once again this is a bold, vivid, visual feast. The svelte direction ensures directness of scene setting and development for this cleverly illuminated  physicality from Murphy, his collaborator Janet Vernon and  revival director Shane Placentino.

The cruelty on display is very accessible. It is delivered with modern attitude, energy and razor-sharp characterisation . Jennifer Irwin’s costume design delves into the quite current, the back then, the traditional, sidesteps into film or pop stereotypes and environmental fantasy,  supported the nowness of the scintillating set.

Puccini’s effective through-composed soundtrack is in the safe hands of the Opera Australia Orchestra guided with wide ranging nuance, shape and attack by Carlo Montanaro. The split-second synergy of orchestral outbursts and flashes or switches on the digital sets help us hurtle through the opera.

At this global moment, history, religion and cultural controversies collide as legislation in the USA  binds some choices for women. Images of stars and stripes fading to black oppressive ominous sets give new-found chills. 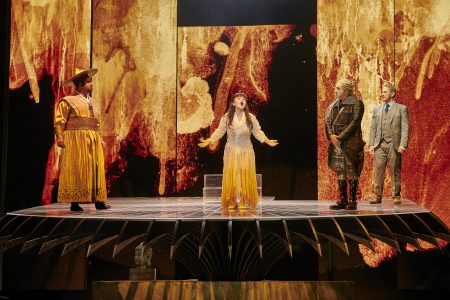 The opera’s opening moments indicate we are in for quite a ride. Cio-Cio-San drops from the bondage of geisha life and from the upper stage into the greedy woman-selling hands of a dreadlocked mobile phone weilding Goro. Here the matchmaker leaps about in suitable caricature from Virgilio Marino. He eagerly sets out as broker to sell a marital home and a blissful local woman for Pinkerton’s deceiving lust.

It is the dynamic duo of Suzuki (Sian Sharp) and Cio-Cio-San (Sae Kyung Rim) which impressively dish out attitude, hope, shock, support and survival throughout. Their solid vocal blend and strength, their athletic use of the stage and their dramatic and vocal success through many costume changes make them standout in this cast.

It is so rewarding to travel with this pair of superheroes.  Girl-Wonder Sharp reprises her signature role of Suzuki with greated  physicality and greater disdain for men from anywhere on their self-appoinmoral spectrum. She wields utility, devotion to gods and dire gesture or attitude as she defends her crumbling Yankee-by-fake-marriage mistress. Her tragic sidekick is played with superhero negotiation of stage, sentiment, singing challenges or screens by Sae Kyung Rim. 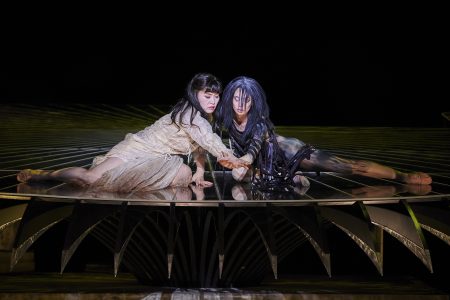 This soprano has amazing commitment to character, detail of music and creation of the modern mood. Her Un bel di, as a trapped character, trapped in a gap of the upper back set and imprisoned by fate, untruth and  fragments of language characters dropping up a pitch black screen is a moment that will resonate and stay with you for some time.

Such powerhouse placement on the stage is matched by an intelligent storytelling for this blocbuster aria in equally powerhouse voice. Its shaping from the text outwards is imbued with a range of subtlety and spontaneity results. It is also evenly presented in the flow of the act. This aria’s performance take place in just one of many of the show’s stunning digital wraps designed by Sean Nieuwenhuis.

Action which crawls, cowers and leaps about Michael Scott Mitchell’s skew nouveau-paper-house architecture is exciting to watch. It exaggerates the tricky holes in commitment, souls and cultural clashes of this sad tale. Its frontal uplift is percarious and the movement backwards as Cio-Cio-San loses her fight is full of emptiness.

The formal male characters from equally fragile cultural pillars rise up with aplomb on this stage. Michael Honeyman’s Sharpless is boldly sung, with nice Western gesture and great poise always in the environment of the ‘other’. This goes also for Jane Ede’s expert measured restraint in movement and haunting vocal delivery as the other wife, Kate Pinkerton. 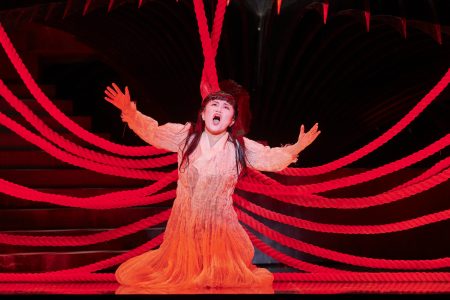 Imperial anger, family brutality and religious tradition abound from David Parkin’s Bonze as the geisha lost to the West is shunned. Kiran Rajasingam’s Yamadori is a pleasing addition to the ensemble variety, elaborately costumed, smoothly sung and moving well through his scene.

Diego Torre delivers a pleasing haughty male force as Benjamin Franklin Pinkerton from earlist dialogue moments. His tenor colour and brand is in secure Puccini style. Unfortunately and fortuitously,  on opening night he was replaced due to illness by local tenor Thomas Strong.

This substitution was successful, with very capable acting, vocal placement and appropriate look on the stage. His torment in Addio fioriti asil found a firm place and sound in both the denoument as well as the modern look and fresh sound of this production.

The pair of fine female leads  blend beautifully for the unique and  encroachment in a pre-tragedy creep of female chorus around the stage for the ‘Humming Chorus’. This is another true highlight which surprises and endures in this gripping revival poduction. Lighting and digital sets work well in tandem here. The chance to witness this moment of pure theatre and newness of approach to opera should not be missed.