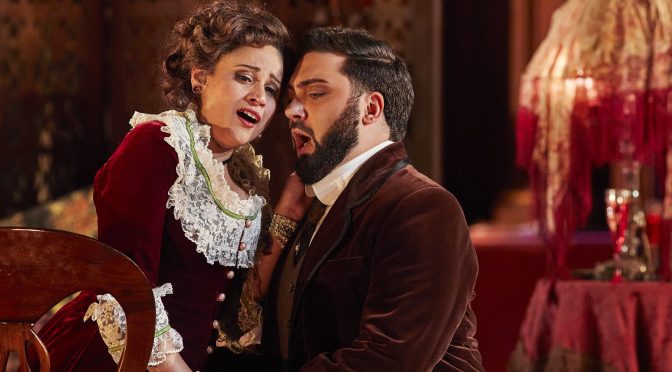 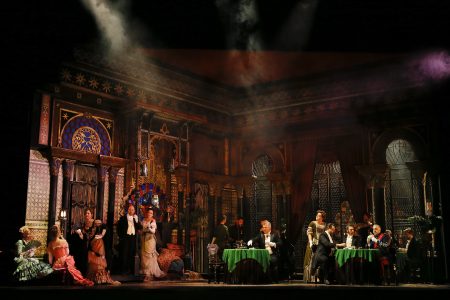 In the final act of this opera, Alfredo sings of the dying Violetta that she is the “light of my life” and also “my very breath of life”. These tender phrases can be seen as aptly describing this revival production. Breath and light help this classic succeed. Beautifully nuanced singing, or breath, imbue the dialogues taking place on an exquisitely lit and accessorised stage.

From Michael Yeargan’s set design with stunningly lit by Nigel Levings’ designs, protagonists perform with a skilful use of a lush hush in the range of their delivery.

The principal cast and supportive orchestra under the guidance of Renato Palumbo save moments of full tone, resisting the temptation to oversing well known material. This leads to a greater, clear attention to text and complexity of feeling accompanying the dialogue.

Seething, unsettling and controlled utterances use a rich range of emotional colour in this telling of the famous, fast-moving tale. A very bearable swift lightness of being results as we watch the the ominous sweet joy unfold.

The believable, bold on-stage chemistry between this version’s verismo couple Violetta (Stacey Alleaume) and Alfredo (Liparit Avetisyan) is impressive. Each interaction they have is a moment where the blend of the vocal timbres and realistic humanity in acting really work. 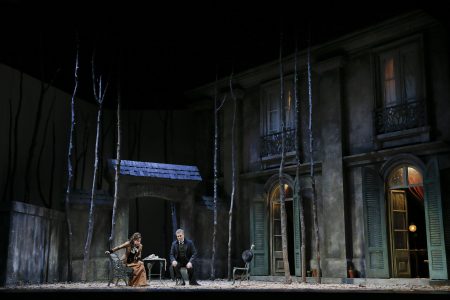 Above: Stacey Alleaume as Violetta and Mario Cassi as Giorgio Germont in Act 2 of La Traviata. Photo credit: Jeff Busby.

Act 1 and the pair’s fast affection is delivered with beautiful lyricism, careful body language and masterful musical movement through the classic duetting.

This popular production by Elijah Moshinsky emphasizes situational contrasts through savage visual contrasts. Fragility, fear, flirtation and frivolity twist and turn as the story doubles back and true love for Alfredo and the courtesan runs so less than smoothly.

In this vein the change to sparse desperation, relationship unrest and family manipulation for Act 2 is accompanied by the stark courtyard set. Mario Cassi’s Giorgio Germont delivers his family-saving plan to destroy Violetta’s domestic bliss in excellent brooding baritone surrounded by wintery wasting in the vivid recreation of the natural environment.

Stacey Alleaume’s dialogue with Germont features superb soft singing for the chilling ‘Ah! dite alla giovine’ expressing the hopelessness of being trapped into future loneliness. She delivers her responses with solid hushed tone, twisted away from Germont into a tired ball on the courtyard bench. 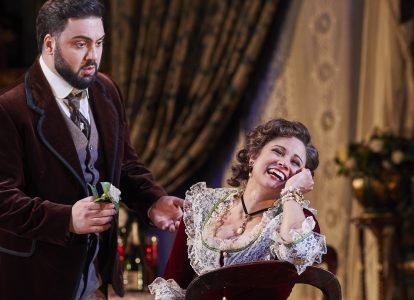 The second party scene in this opera showcases again the joyous tutti tone of the Opera Australia Chorus. They have the chance to fill the Dame Joan Sutherland Theatre stage once more with a polished, entertaining group character.

Magnificent lighting at the conclusion to the scene of a party at Flora’s shines on the tableaux with the sheen of an antique painting. Luminosity continues in the internal scene of Act 3, with beams of light from two sets of french doors intersecting at Violetta’s invalid chair.

From this point, Stacey Alleaume wows us with the reality of her depiction of illness, and with a stunning version of the well-known ‘Addio del passato’ aria. Her multidirectional, multicoloured singing whilst slumped and dying is a tour de force of interpretation and convincing acting. Her virtuosically changeable vocal tone in urgent solo and ensemble moments is exemplary.

Advanced, engaging chemistry with Avetisyan’s Alfredo to complete this story’s trajectory includes spurts of energy and magical breath breath or light right until the end. This includes a sudden drop to death from Violetta which is amongst the best and most tragic you will see.

As Opera Australia’s Winter Season in Sydney hurtles along studded with popular classics, this verismo opera and veritably fine production must be considered something of a jewel in an impressive crown. The power and gutsiness of opera and its stars as we have the opportunity to witness here  will thrill and move you.

La Traviata plays at the Sydney Opera House until July 29