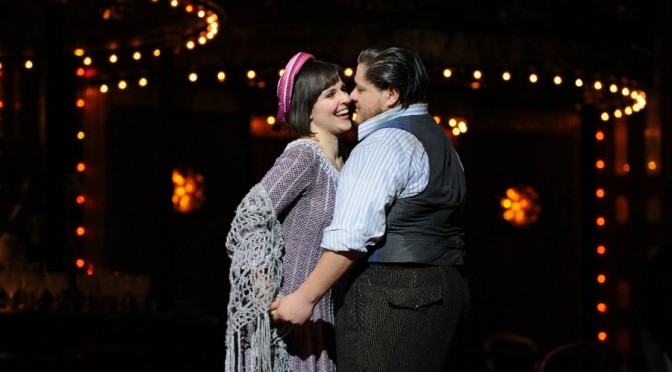 Opera Australia begin their 2015 season yet again with this excellent revival of Gale Edwards’s version of LA BOHEME, originally seen in 2011 .

Romantic and lyrically, passionately performed  by cast and orchestra it still feels as fresh as if it was written yesterday.

Musically, the terrific Australian Opera and Ballet Orchestra, under the very energetic , passionate and enthusiastic baton of Andrea Molino, is superb, giving a lush, dynamic rendition of Puccini’s much loved sweeping, vibrant score.

LA BOHEME is one of opera’s most popular and best known works, where we follow the story of the young Bohemians living and loving through harsh, trying times, and focusing on the tragic love story between Rodolfo and Mimi.

This Opera has inspired audiences and artists alike since its premiere, with countless works based on the opera mushrooming including the Broadway musical RENT.

John Rayments’ precise yet atmospheric lighting completes a beautiful, cinematic picture (even the emphatic drape of the scarlet front curtain concealing what’s to come, with the opera’s title spelled out with subdued incandescent bulbs aka Baz Luhrmann, referencing the earlier much loved production.

Thomson’s huge sets take us from the freezing garret to a chilling , intense tollgate via a high-glam Spiegeltent idea that acts as a counterpoint to the extremes of wretched poverty and opulently vulgar wealth seen elsewhere in the production.

Very effective use is made of the revolve at times. The glittering. multi-leveled posh theatre, draped with courtesans in varying degrees of undress in the boxes, gives an uneasy energy and exuberance to the Café Momus scenes.

This production very effectively counterpoints young love and naive optimism with new found sexual freedoms and a menacing under-current of what is to come. The political and economic upheavals underscoring the original story here act as a background for the pre-war years of 1930s Berlin, where deprivation and decadence co-existed in equal measures.

The work takes on a guise of eerie sociopolitical menace, adding to the star-crossed tragic tryst between Mimi and Rodolfo. Their doomed relationship, in some ways, is symbolic of the death of culture and freedom enforced during the Third Reich.

Internationally renowned guest star Maija Kovalenska as Mimi is tremendous and she gives a luminous performance,–sweet , pure and fragile , dreaming of beauty, and featuring a  stunning voice.

Maija’s delicate rendering of  her introductory aria ‘ Si, mi chiamano Mimi ‘  is beautifully nuanced, allowing her performance to further build in the final acts .As the doomed Mimi she is enchanting with a warm creamy voice, terrific , dynamic control of light and shade and an excellent sense of line.

Diego Torre does not perhaps really fit the visual image of the ideal Rodolfo, however he is in fabulous voice and vocally gave a stunning performance; his huge dynamic tenor supported by a dramatic performance throughout his character’s agonising. emotional rollercoaster journey.

Diego is both tremendously powerful and yet quite vulnerable as the unlucky romantic poet hero. The duets between Rodolfo and Mimi are magnificent. Torre is incredibly focused and we feel his passion and heartbreak. His extremely impressive rendition of the famous ‘Che Gelida Manina’ aria ( ‘Your tiny hand is frozen‘) is spell binding.

Lorina Gore as the blonde, slinky , scheming Musetta is terrific, showcasing one of Julie Lynch’s few opportunities for over-the-top glamour with her costume design, and providing  a thrilling, enchanting vocal performance replete with smoky spotlight and vintage microphone in the style of  Marlene Dietrich. She is radiant and makes the reconciliations with Marcello sizzle.

Another highlight was Andrew Jones’ portrayal of Musetta’s beau, the charismatic painter Marcello, featuring hidden ripples of violence , controlled machismo and the rich tones of his terrific baritone.

Marcello has an on-off relationship with the beautiful Musetta who is tempted away by  far wealthier  suitors.

Conflict mars the two pairs of lovers mutual devotion, – will they be able to get through?!

Gore as Musetta, has a number of very big vocal moments and tends to grab attention whenever she’s on stage – especially in Act 2, with her waltz Quando me’n vo’ (‘When I go along’), the famous ‘Musetta’s Waltz’, as she is torn between love and wealth, revealing intensity and beautiful timbre.

The final duet between Marcello and Rodolfo is a highlight , enhanced by a lovely violin solo.

Tall, gangly Shane Lowrencev gives a  vibrant, detailed, generous, admirable performance as the concerned Schaunard, a musician and confidant of Rodolfo and Marcello, who together form a sort of starving, artistic group with their friend, the philisopher, Colline (David Parkin). Colline’s aria to his coat (‘Vecchia zimarra – “Old coat” ‘) is very moving .

Much fun is also had by the very engaging children’s chorus too, a highlight of the Café Momus scenes in Act 2.

This was a compelling, very moving revival of this classic work. Running time 2 & ½ hours (approx) including one interval.

Opera Australia’s LA BOHEME by Puccini is playing in repertoire on various dates until the 16th January at the Joan Sutherland Theatre, Sydney Opera House.