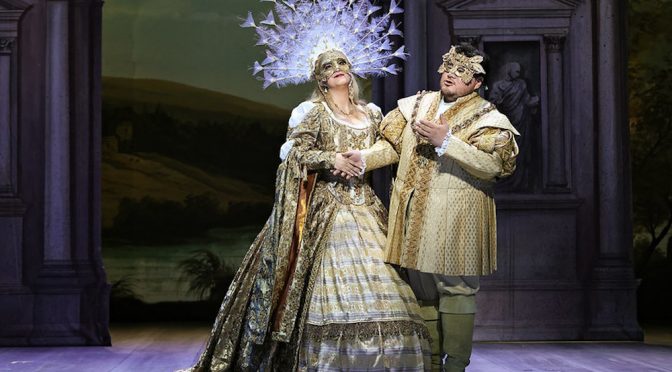 One of the most popular opera composers in the world today is Giuseppe Verdi. His writing is full of drama, adventure, memorable melodies and magnificent orchestration. Some favourites he wrote which you’ll recognise are Aida, La Traviata, Rigoletto, Nabucco, Il Trovatore, Falstaff, Otello and Don Carlo. When you’re a Verdi fan you’re bound to want to see his lesser known operas as well. Verdi completed 26 of them, after all.

This is one of Verdi’s early works titled ‘Ernani’. His fifth opera which he completed when he was about 30 years old. The story comes from a controversial play penned by Victor Hugo about 15 years earlier which caused a physical riot in the theatre on opening night at the Comédie-Française in Paris. Even though the French Revolution and the Great Terror were still deeply etched in the minds of Parisians; the opera Classicists thought it completely outrageous seeing the King make his entry from hiding in a cupboard and later hiding in a crypt.

Things had calmed down by the time Verdi took up the story with his young librettist Francesco Piave and their opening night was received in a much more positive light. The reviews significantly grew Verdi’s fame across Europe, Britain and the United States. So, although we don’t hear much about Ernani these days, it was a milestone in Verdi’s career.

The story is set in the 1500’s in a fictional Spanish court. The values of the time were possibly easier to understand for Verdi’s audience in the 1840’s but for us in 2021, they seem very odd indeed.

“I will kill myself rather than marry that man.”

And “Your father took my father’s lands. Prepare to die”.

These ideas we are familiar with but…

“I give you my life. If I hear you blow this horn, I will kill myself.”

“You will have to kill me before you can arrest my guest for whom I have offered hospitality.”

And “I was going to kill you but now I’ll conspire with you against the other bloke for a while and we’ll get back to killing each other later. That’s the honourable thing to do.”

Hmm, these are a little harder to grasp.

How do you stage such a dated set of values whilst still allowing the audience to enjoy the music? The answer: A stroke of genius from West German Actor/Director Sven-Eric Bechtolf. An opera set within an opera. The 1500’s story stays intact complete with period costumes and melodramatic gestures. The scenes are surrounded by the backstage workings, painted scenery and props department of the Victorian era true to the date of its premier performance. Now the odd plot twists and honour values are forgivable. Everyone in the audience then becomes a part of the production as we watch the scenery raised and lowered with little comedy antics thrown in by the backstage crew. Absolutely perfect.

Through the years we’ve seen so many attempts to reinvent classic opera stories merely for the sake of producing something different to look at. This has got to be the best thought out reinvention I’ve ever seen, artfully manifested through revival director Laura Galmarini.

In the leading roles we balance locals with internationals. The title role is played by one of our Opera Australia principals Diego Torre. He had a bit of a quiet start but grew in strength as the night went on. His leading lady is Australian powerhouse soprano Natalie Aroyan who dominated the night with an extraordinary, faultless performance.

Guests of the company were Bulgarian baritone Vladimir Stoyanov as Don Carlo, King of Spain and Ukraine raised bass Vitalij Kowaljow as Uncle Gomez de Silva in his fabulous turquoise boots. Stoyanov has a lovely tone and settled well into the role as the acts progressed. It’s challenging when the story calls for the character to be often in hiding or in disguise, then to cast a regal shadow whenever he steps out into the spotlight. Kowaljow was excellent both in voice and acting, hitting it home from the very first entry.

Returning to work once again with the company is Italian conductor Renato Palumbo, former Director of Deutsche Oper and Istanbul State Opera. Cool as a cucumber, Palumbo was clear and spacious in his interpretation, deftly following the lead singers in their arias. Such a delight to experience. The orchestra rallied well under his baton and the chorus were crystal clear in their work as well.

The production was co-produced with La Scala in Milan. Sets by Julian Crouch making full use of the depth of the stage, a mammoth array of costumes by Kevin Pollard and subtle lighting by Marco Filibeck. All work of the design team was absolutely superb getting more and more fantastic throughout the evening whilst keeping with that strong theme of opera-within-an-opera running right to the end.

The audience loved the performance and gave a rousing applause. It’s great to see our company broadening its repertoire with such appealing works.

It’s recommended you book early so you can secure your tickets. Opera Australia is delighted to advise that the Company can now run the Joan Sutherland Theatre at 75% capacity.

There are four acts split in the middle with an interval. Masks and check-in are currently required unless exempt. Alcoholic beverages available before the performance and you can take your drink/food into the theatre.