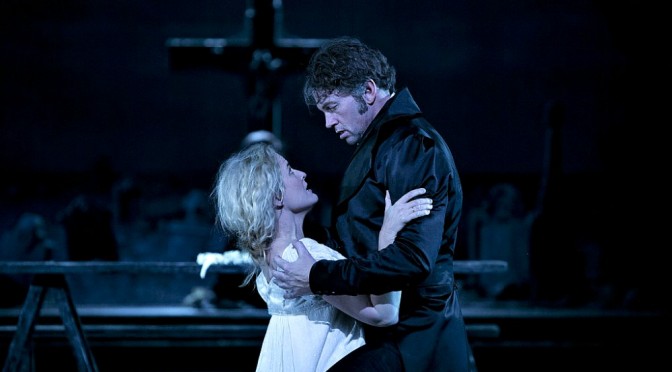 Musically this new version of Mozart’s ‘Don Giovanni’ is superb and thrilling with spectacularly brilliant performances from the wonderful orchestra under Maestro Jonathan Darlington (featuring the fortepiano played by Siro Battaglin for the recitative) and the glorious cast led by the great Teddy Tahu-Rhodes.

Sir David McVicar’s direction is deft and assured. This is a bleak, dark production, with quite a cold ‘feel’ .There is a swooping black curtain hiding most of the set when we enter. The huge set resembles a bombed/ruined palace with rubble, and there are pieces of marble everywhere.

A HUGE staircase (think ‘ Masquerade’ from ‘Phantom of the Opera’ )dominates the set when lowered with people running up and down/lying/standing /sitting on it. Scene changes however are quite fast and fluid with sliding sections and raised /lowered panels. Much use is made of tricky trompe l’oeil and diminishing perspective in the designs. The Gothic setting allows McVicar to examine the supernatural aspects of the story with chilling thunder and lightning effects and emphasis on funerals (much of the opera is set in church or cemetery).

Robert Jones’s period costumes are wonderful. They are almost all in black, emphasising the ‘Gothic’ /vampire feel of this production. The Don’s opulent footmen have glorious Beardsley–like black and white elegant livery and the masked costumes for Donna Anna, Donna Elvira and Don Ottavio in the second half ,when they attend Don Giovanni’s revels ‘in disguise ‘, are glittering Beardsley like in black and silver. Stunning. Leporello’s switching costumes with his master is in this version quite believable as they are similar in height.

The opera is a moral tale of a serial seducer, rapist and murderer getting his just deserts to Mozart’s divine music. In this version Tahu-Rhodes as Don Giovanni drags the women around , treats them roughly and dangerously and is cruel. Tahu-Rhodes however has a marvellous time in the role and is perfect for it – tall, devilishly handsome , imposingly athletic build, surly energy and that divine dark velvet chocolate voice that has the women swooning. A powerful, charismatic performance with arrogant undertones of malevolence that dominates the show.

Shane Lowrencev is a terrific somewhat bumbling Leporello, the Don’s servant, who wears glasses , drinks heavily and is gawky. A sardonic rogue, his ‘catalogue aria ‘ was tremendous and delivered with great relish.

Jud Arthur is a deeply morbid Commendatore, well matched with Tahu Rhodes in defiant nobility. When ghostly in grave clothes, his wound still bleeding , Banquo like, he is chilling and terrifying in the finale, matched by some frighteningly effective ghoulish women who appear to drag Don Giovanni to his fate.

Richard Anderson is most effective in the difficult role of surly Masetto, impatient and rough, cowardly when confronted by his masters but secretly bullying Zerlina. John Longmuir, as Don Ottavio, ( who is rather elegant, dull and prim ) lets rip to display a voice of delicious velvety smoothness.

The female principals were uniformly strong. In this show, as a letter by Mozart reminds us ,we see examples of the ‘noble serious ‘ role – (virtuous Donna Anna), the vivacious ‘ buffa ‘ character (Zerlina) and someone struggling between the two (Donna Elvira).

Elvira Fatykhova sang Donna Anna with many coloured warmth, bringing out emotional depth and a convincing range from defiance to vulnerability. The tricky tessitura was sung effortlessly Nicole Car, as the deeply troubled and torn Donna Elvira. Carr sang the second act aria ‘ Mi tradi quell’alma ingrate ‘( in effect asking herself “How could I fall for that ghastly creep?”) with an even clarity and great smoothness. Her Donna Elvira is beautifully sung, comfortable at the top, clear and never overplayed at the bottom. In a moving and detailed portrayal she inhabits the conflicted character from her first arrival in men’s travelling attire to her final desperate attempts to save her defiler.

As the almost-seduced peasant bride , Zerlina, Taryn Fiebig’s bright , fresh voice displays a delightful clear glow and beauty of line, her trapped ,terrified actions highlighting the pressured undercurrent of sexual violence. She is thrilling , with a delicious Batti, and in a clever twist a touching secret is revealed in her ‘Vedrai carino’. She is warm and sympathetic and the difference between her sexual curiosity when Giovanni first tries it on with her to her horrified realisation that she’s way out of her depth at the masked ball-cum-orgy (wickedly , impressively staged by Andrew George), is excellent.

A bleak, disturbing version based on the ashes of Don Giovanni’s moral decay.

DON GIOVANNI plays at the Joan Sutherland theatre, Sydney Opera House until the 30th August 2014. Running time 3 hours and 30 minutes with one interval.