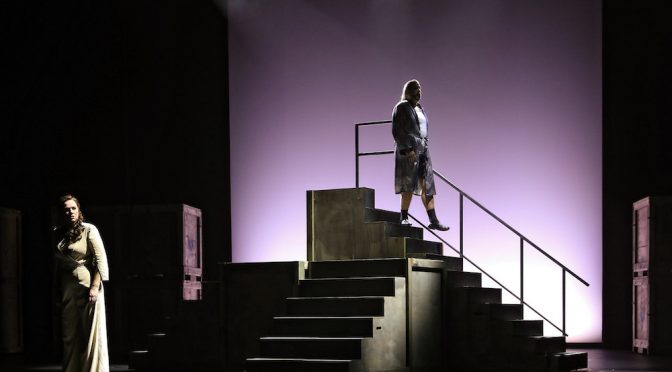 Standing out in stark contrast to the rest of this year’s offering, Opera Australia (OA) offers the modern creation of Béla Bartók, BLUEBEARD’S CASTLE. A story of intrigue, innocence, violence and cunning.

As a young man, Bartók set off to travel with his friend the poet Béla Balázs (the two Belás), and sometimes with fellow composer Zoltán Kodály, collecting folk stories and tunes from all around their native Hungary. This became an important record of what makes up the culture of their country. It continued to influence Bartók’s work throughout his life.

Back in Budapest, Balázs had taken it upon himself to write his own version of the centuries old tale of Bluebeard – Barbe bleue in French – as a play. Bartók made very few alterations to the libretto creating a one act opera submitted for two opera competitions.

In an era where the likes of Bellini and Wagner were kings of the European opera houses, this work may have been ahead of its time so was slow on the uptake by the Hungarians.  It was received better in German theatres a few years later where the works of psychoanalysts Karl Jung and Sigmund Freud were very popular. Everyone will have fun analysing the psychology of this story and the symbolism held within.

It’s not certain how old the tale of Bluebeard is or where it came from. Balács found the tale in a French book of “historic” tales published in 1697 – so it was old even then. It’s a very gory story, the original tells of a nobleman who habitually tortures and murders each of his wives. This was possibly loosely based on the real life story of French nobleman and Satanist, Gilles de Rais. In the 15th century he was tried and executed for torturing, sodomising and murdering more than 100 children. Apparently, he had tried many times to summon a demon without success and was offering body parts as an enticement. Gory indeed. This production picks up on the suggestion of de Rais’ by giving Bluebeard the traditional red blood filled or garnet finger ring.

In Bartók’s opera, our Bluebeard character marries young Judith and brings her to the castle. He offers to let her leave but she rejects the offer and says she loves him. The outer doors are locked and she realises this spooky old castle is so very dark with wet walls. She requests the keys to  the locked interior doors so she can let light into the castle. There are seven locked doors to be unlocked. Each key Bluebeard gives makes him more reluctant and Judith all the more tenacious.

If ever you are going to tell a child a horror story, reverse psychology is the best way to keep them curious. “Judith, you can have anything you want, just don’t ask to unlock all the doors.” It’s guaranteed to keep Judith’s attention – and ours – till the very end which makes for great story- telling. As each door is opened we discover more of Bluebeard’s infamous history. The rumours were correct and Judith is in grave danger!

The opera is written almost in sympathy for the loneliness of Bluebeard which is something Bartók may have related to on a very personal level along with the idea of an ever curious wife prodding to know all the hidden secrets. (Bartók was married by this stage, painfully shy and dedicated the opera to his wife.)

This modern production is visually stunning, the highlight being the magnificent lighting design of John Rayment with sharp angular spot lights, blocked out reveals and sparse use of the company’s LCD screens. High class and almost Scandinavian feeling, the set is placed on a background of black and topped with an enormous lighting grid. There are basic building blocks wheeled around by visible stage hands to create a never ending variation of “places” for Judith to roam or hide in the castle. With a colour scheme of cream, wood and black, it is the libretto that paints a vivid coloured picture in our imagination of the discoveries she finds behind each door.

Director Andy Morton and Associate Director Priscilla Jackman have delved deep into the psychology between the two characters which very naturally carries each one along their emotional journey rising to a climax. Bending the original end of the story to a scenario more acceptable to modern opera audiences was a wise one.

These are challenging roles for our two lead singers who are on stage throughout the entire opera. Australian Bass-baritone Daniel Sumegi returns home to perform the lead role. Despite the temptation to play Bluebeard as a one-dimensional baddie from the beginning, Sumegi plays the role as a tormented, almost apprehensive soul. It was powerfully sung with outstanding acting skills.

Not to be upstaged is Romanian mezzo-soprano Carmen Topciu glimpsed by Australians last year as Carmen and Anna Bolena the year before.  Topciu offered a very relatable Judith beginning as a fresh and loyal wife, becoming intoxicated with the material wealth she discovers then, anxious as her situation becomes more desperate. Both artists easily fill the stage with their performance. Outstanding work.

Conductor Andrea Molino carried the score through with great expertise and the orchestra felt very comfortable under his leadership.

This is a rare gem of an opera, not one likely to be repeated every year so it’s recommended you get along to see it as soon as you can. The season is short running only till 10 March 2021.