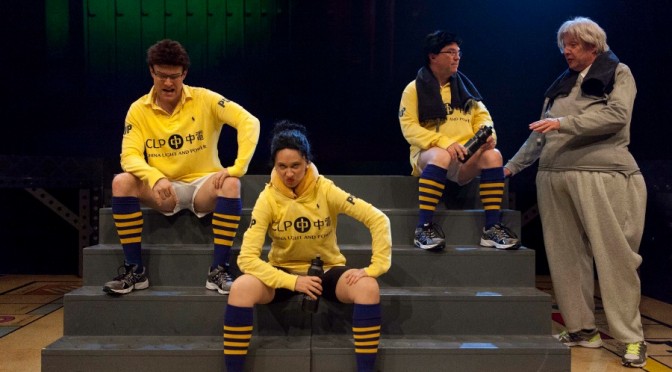 You don’t take a long walk off a short pier but you do take a long walk down a long pier. But last night it was certainly worth it to see Sydney Theatre Company and The Wharf Review’s latest offering: OPEN FOR BUSINESS at the Wharf 1 Theatre.

I was lucky enough to sit next to leading Sydney theatre actor, Peter Carroll, (currently rehearsing A Christmas Carol at Belvoir, which I promised to review), who opined that writers of revues are not given the recognition they deserve considering how clever, accurate and funny their work often is. Last night was all of that and entertaining, even inspired in many instances. This outstanding talented group of writers and performers took aim at everyone in federal politics from speaker to PM and from Greens to P.U.P. in a high energy, tuneful rollercoaster that grabbed our attention from the start!

The very first item, a few words from Madame Speaker, Bronwyn Bishop, set the tone of very accurate caricature and great impersonations which were the hallmark of the show. The audience were chuckling then roaring with laughter almost constantly throughout as the wit hit the mark, inexorably debunking and denuding our most deserving public figures.

The writing was more than supported by virtuosity at the piano from Phillip Scott. Every time I see Mr Scott he manages to delight the audience more than the last. And I knew he could sing and act but last night’s efforts at both were extraordinary. I particularly liked his take on the editor of the Telegraph. And the Gregorian chant during the skit on the Catholic Church’s handling of sexual abuse was marvelous.

But then the singing was stupendous across the board with standout renditions from Amanda Bishop, (what a voice; the audience collectively gasped on several occasions!) The caricatures were terrific, especially Jonathan Biggins as Clive Palmer, in a hysterical Palmer United skit with fantastic costumes and makeup that nearly had Mr Palmer (and the audience) rolling on the floor! The choreography in the “Get Your Green On” number was hilarious. And I’ve never seen a wittier or more accurate impersonation than Mr Biggins’ Paul Keating – delightful!

Doug Hansell was also great in all areas, although the challenge of his tongue twister Christopher Robin (Pine) piece distracted a little. (That’s very easy for ME to say!)

The sets and lighting effects were splendid and imaginative and added to the visual impact of a truly magnificent night’s entertainment! After the third curtain call I remarked to Peter, beside me that Revue in Sydney is better than ever and he said:”Here are the words for your review.”

It is truly is a must see.

The Wharf Revue 2014 runs at the Wharf 1 Theatre Sydney Theatre Company until the 20th December.