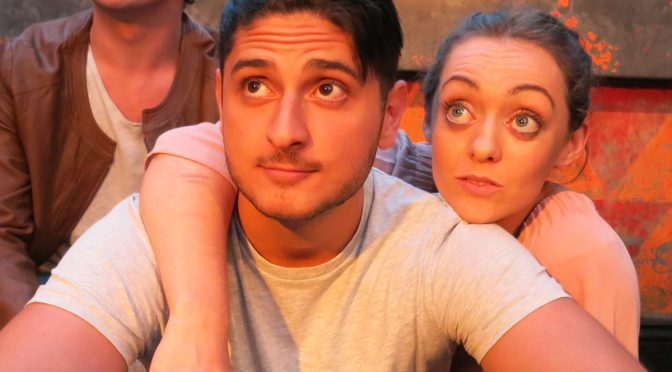 It may be true, as ONE WAY MIRROR suggests, that modern actors are the truth-tellers yet when Thespis stepped out of the chorus to become someone else, there were riots in the Athenian capital.  How dare a person pretend to be another?  ‘Actors are Liars’ screams extant graffiti.

Liars indeed.  The particular actor-liars in this production are characters who are paid to use their acting skills as academic sleight of hand.  Little or no truth is told by these characters.  However, the truths extrapolated by their professorial observers are presented with increasing scepticism and moral concern to the audience.  It’s a fine premise for this new Australian work presented with commitment and coherence by the director and cast.

It’s a tiny space, Blood Moon Theatre, with a tinier stage and difficult sight lines.  Solution, strip it out.  Embrace the space by putting the audience against the walls in the maze to observe a cast within touching distance.  The first of whom is a famous example of “but judge, I was only following orders”.  He is there, and we hear from him, and about him, to begin the show.  During the next 80 minutes we will travel with the cast to the psycho-social experimental labs of places like Yale in the early 1960s where actors are employed, at good rates, to be the rats.

It wasn’t just Stanley Milgram who conducted experiments around authority figures and what test subjects would do under pressure but the Milgram experiment is front and centre here.   Test subjects administering increasing voltage to a person who they had just met …  It is hard to watch, that sequence.  Hard to watch and hear.  But totally absorbing.

The text of ONE WAY MIRROR is at its strongest when it is rooted in reality;  I was fascinated by the clinical stuff.  The sequences are sharp and busy, the well edited stats accessible and the performances pinpoint . Those scenes were at once highly entertaining, there’s a brilliantly created running gag, and also replete with a sadness and increasing anxiety about the context of these experiments .  Where the show did not draw me in was the two parallel love stories or the navel-gazing of the actor-characters.  The meta elements fought against the characterisation and the dialogue didn’t always engage.

But the concepts can sweep you up.  For me, it was the idea that actors lie by nature of their profession, but how and when and to whom they choose to lie is entirely a decision. If they have the agency to manipulate how they present themselves to the world or to intimate acquaintances, who amongst them can they trust?

The cast of 9 are uniformly strong and their ensemble work in the interlocutory sections is stellar.  They interact with each other in a very coherent way in these scenes, with each character well-crafted and clearly expressed.  Their movements  around the intimate space are not jarring nor forced in a terrific use of the space by director and writer Paul Gilchrist. And the lab feel was exacerbated by the absence of sound effects and lighting changes or of distracting costuming.

What did not carry for me was the relationships.  In the actor-character scenes, and especially the Ophelia /Mike love story, the truth didn’t ring to  provide the emotional groundwork for the  denouement.  But I did appreciate the grounded nature of the storytelling.  After the nuanced and necessary Milgram experiment  there is no gratuitous shock value in the piece, it must have been a temptation given the history being explored.

ONE WAY MIRROR is designed as an experiment itself.  By virtue of the staging, script and performances we, the audience, are also made complicit, leaving us  wary and self reflective.  “Tainted” by what is done in the name of science, in our name.