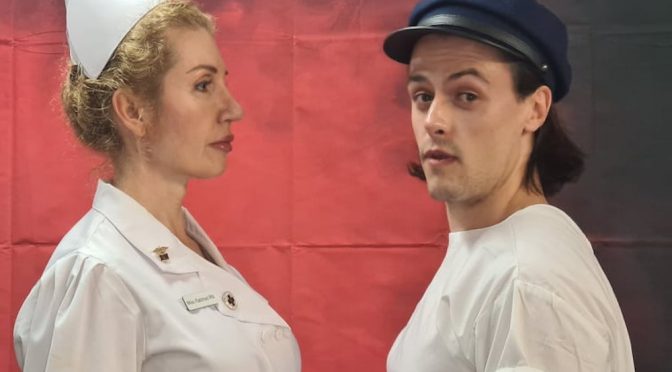 American writer Ken Kesey’s novel One Flew over The Cuckoo’s Nest was published in 1962. The play adaptation, written by Dale Wasserman, was first performed in 1963. The legendary movie directed by Milos Forman won five Academy Awards, including best director and best leading actor and actress.

It remains a powerful work. The varying quality of mental health institutions still receive news coverage and ECT treatments are still performed, albeit as a last resort. One Flew Over The Cuckoo’s Nest remains a prescient play to perform and Ruby Productions recent season of the play is to be commended.

Anthony Darvall made for a feisty, impish, pugnacious Randle McMurphy. Could there ever be any other after Jack Nicholson’s performance.

Margareta Moir made for a suitably icy Nurse Ratched. Again could there be any other?! Louise Fletcher’s performance  still gives me chills.

Alex Levett gave a touching performance as Chief Bromden. The scene, one of the key scenes in the play, when McMurphy, quite  accidentally, discovers that the Chief can speak when he replies to something that he has said, is well played by Ryan and Darvall.

James Ryan gave a winning performance as Dale Harding, the accepted leader of this very disparate, unconfident and inarticulate group of men. McMurphy has the best communication with Harding.

Kieran Hudson played the stuttering, nervous wreck that is Billy Bibbit. It is the darkest of moments when Nurse Ratched persecutes Bibbit over his sexual encounter with prostitute Candy Starr, saying that she will tell his mother, a moment that Bibbit doesn’t recover from.

Glen Levett impressed as the spineless Dr Spivey who finds it hard to stand up to Nurse Ratched though as a Doctor even though, of-course, he has much more authority than her.

Hannah Robinson looks and feels the part as McMurphy’s ‘tarty’ friend Candy Starr, a prostitute who releases, not sure if that’s the right word! Billy from his virginity. Elizabeth Victory also looked the part as her bawdy, risque playmate Sandra.

Dylan Collerson impressed as the very disturbed Scanlon, an inmate who is obsessed with explosives and destruction. He is one of the few patients.

Anthony Ghosn impressed as Martini whose brain is addled with hallucinations.

Ron Crowe impressed as a a hell raising patient who turns darkly inward after he is forced to have a lobotomy.

A Ruby Production, ONE FLEW OVER THE CUCKOO’S NEST played two performances on Saturday 18th  June, 2022 at the Hellenic Arts Theatre within the Addison Road complex, 142 Addison Road, Marrickville.

The next Ruby Production will be a production of the stage adaptation of the British television series ‘Are You Being Served’ at the John Lees Centre, 15 Evan Street, Penrith on the 25th June, 2nd and 9th July at 2pm and 7pm.