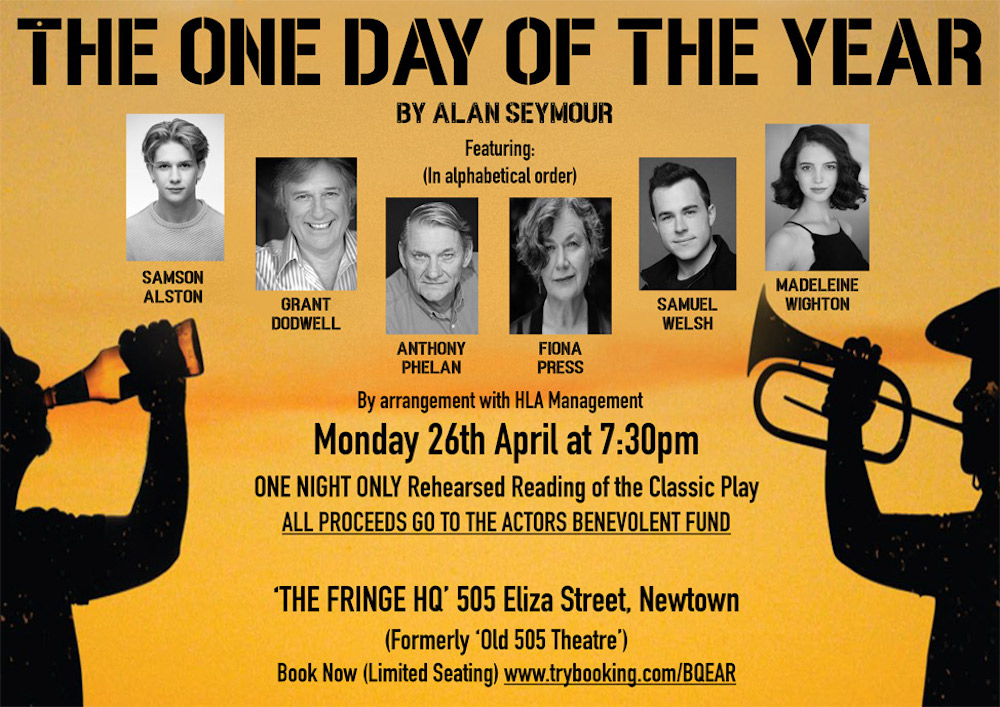 Lambert House Enterprises (whose work in the last year has included hit seasons of The Credeaux Canvas, The Shape of Things and Fag/Stag) are proud to announce a gala rehearsed reading presentation of an Australian classic .

Six of Australia’s leading actors, including some of its most exciting new talent, will feature – for one night only – in a presentation of Alan Seymour’s iconic The One Day of the Year – on Monday April 26 at Fringe HQ (formerly Old 505 Theatre), 5 Eliza St Newtown at 7.30pm. And all proceeds benefit the Actors’ Benevolent Fund.

Seymour’s play has remained a relevant and powerful piece of theatre since its first controversial performance in 1960 by the Adelaide Theatre Group (when those involved received death threats!). The first professional season was in 1961 at the Palace Theatre in Sydney, when similar controversy (and threats) pursued it.

Seymour’s play then travelled to London’s Theatre Royal where it was a critical and popular success. It received a major revival in London in 2015 with an all-Australian cast lead by Fiona Press. Fiona will be reprising the role of ‘Dot’ in the upcoming Sydney performance.

The play revolves around the Cook family and the tension created when firebrand son Hughie challenges his father Alf on his attitude toward Anzac Day. Hughie and his girlfriend Jan plan to document Anzac Day for the university newspaper, focusing on its traditional binge drinking. Moreover – for the first time in his life – Hughie refuses to attend the dawn service with Alf. When he watches the march on television at home with his mother, he is torn between outrage at the display and love for his father.

Joining Fiona Press in this special reading are stage and screen legends Grant Dodwell and Anthony Phelan. They’re joined by Samson Alston, Madeleine Wighton and Samuel Wels, fresh from his national tour of The 96 Storey Treehouse.