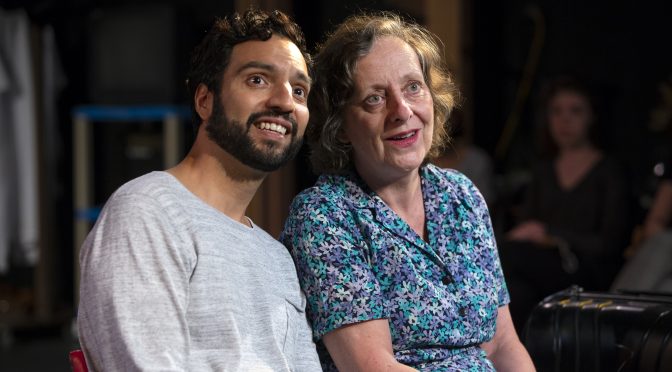 Its Christmas and theatre director Will Drummond is having a huge mid life crisis.

Nothing is certain any more. His parents are suddenly old, his professional world is changing, everyone around him seems to be losing faith and losing the plot and it feels as if society had lost its soul.

For Will, it’s going to be a time of reckoning and a journey of discovery towards a deeper if not especially comfortable awareness of himself.

One of  Australia’s leading playwrights this Michael Gow play was first performed at Belvoir Street in 2014. with BHrendan Cowell in the lead role.

This is a dark play with Will dealing with his mother’s demise as a result of pancreatic cancer. I have to say that I found it particularly dark as I lost my own mother as a result of this very insidious and fast moving form of cancer.

The play is set in the world of theatre. Not finding much work as a theatre director, one of his best friends’ encourages him to do some teaching. Will is not impressed with this option, even though the teaching offered would be in one of his favourite and most passionate , the plays of Bertolt Brecht.

Brecht’s work was openly political and left wing and so is Will as we soon learn.  One of the books that he walks around with is by Karl Marx.

Patrlck Howard’s very capably directs this production. His staging  sees  the whole of the New’s large stage area used. Its very theatrical in style with constant shifts of focus and location and the use of an on stage chorus. All the cast stay on stage for the entirety of the performance.

In the lead role Francisco Lopez made for a very warm, appealing, vulnerable Will. Alice Livingstone gave a strong performance as his gravely ill mum, Jeanie.  Martin Portus played the Chaplain like figure of Bill who was a frequent visitor at Jeanie’s bedside.

The play had some comic relief with some lively bChristmas songs (the play’s title comes from a well known Christmas hymn) and a few brief cameos such  as Nathalie Fenwick and Bryden White-Tuohey playing a very pretentious young German couple.

Nicholas Foustellis played the Doctor who sensitively relays to Will the bad news about his mother’s condition.

As is often the case in Michael Gow’s there is a play within the play, in this case an extract from Oscar Wilde’s The Importance of Being Earnest  with Amy Victoria Brooks playing Lady Bracknell and Sandra Cambell playing Miss Prism.