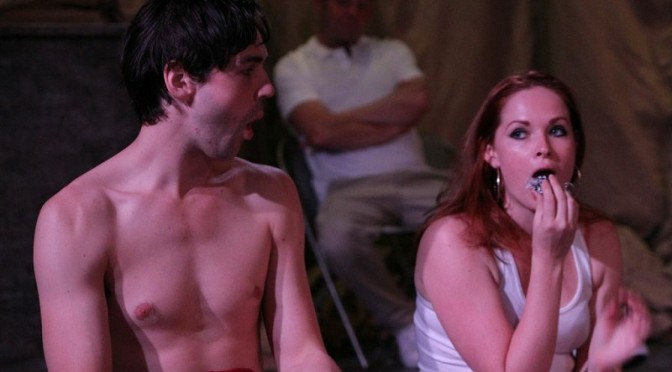 There’s a billboard for another show in Sydney that has the quote “if only every night in the theatre could be as good”. It’s a quote worth purloining for the Pantsguys Griffin Independent production of Simon Stephens’ ON THE SHORE OF THE WIDE WORLD.

A family saga set in Stockport strewn over a 9 month period, it spills and sprawls over three generations of the Holmes family, grandparents Charlie and Ellen, parents Peter and Alice, and their sons, Alex and Christopher.

Synchronised like Sydney’s New Year’s Eve fireworks, the pyrotechnic display starts with firecracker Christopher, the youngest of the family exploding with adolescent exuberance over the imminent sleepover of older brother Alex’s new girlfriend, Sarah, sanctioned by the boys’ parents whose only proviso is that they “be careful”.

Christopher is sex obsessed hoping to catch sounds of squeaky springs or any other noises of his sibling’s sexual encounter. On meeting Sarah, he becomes infatuated with her, borrowing a fiver from his grand-dad to buy her a present.

Alex Beauman’s effervescent performance as Christopher is so candescent it threatens to suck the oxygen from the other players, but like chrysalis, each character and each performance burgeon as the myriad layers of the play unfold under the sure footed direction of Anthony Skuse.

As the young lovers, Graeme McRae and Lily Newbury- Freeman are touchingly tentative as virgins on the verge of carnal consummation, although she has a brazen quality that’s unsettlingly flirty around her beau’s father.

Indeed, flirting, past and present, flits through this play almost like a motif.

Grand-dad accuses grandma of “not dressing for him” anymore but tarting herself up for a solo trip into Manchester. Grand-dad has more than a flirtation with booze and admits to a near thing fling many years ago.

A client of his house restoration work, Susan, flirts with Peter, though she is pregnant. There’s a touch of DH Lawrence here, as the refined publisher is attracted to the plain speaking artisan.

And Alice attracts the amorous attention of a surprisingly unexpected suitor.

Paul, a pal of Alex who has escaped Stockport for London, flirts with pharmaceuticals and a fascination with fire.

When Alex accuses his grandfather of being a coward, Charlie rebuts by stating that we are all cowards at some time, just as we are mosaic  in our makeup, what a piece of work, the sum of all our various parts.

As Charlie and Ellen, Paul Bertram and Kate Fitzpatrick are superb.

Fitzpatrick’s white hair and frigid veneer is the personification of a wife in the winter of her marriage and Bertram’s alcohol addled abuser is so assuredly shaded that it elicits empathy as well as anger.

Amanda Stephens-Lee is exquisite as Alice, fierce, fragile, and funny.

Huw Higginson as Peter is pure emotion, a good man, an honest man, but wracked with guilt and suspicion, it’s a heartbreaking, gut wrenching performance.

Emma Palmer as Susan, Jacob Warner as Paul and Alistair Wallace as John round out this outstanding ensemble.

A beguilingly simple yet functional set that is redolent of a house under restoration, presents a clear, clean and vivid thematic play space whilst facilitating the pace and momentum of the piece.

Less histrionic than the much lauded AUGUST: OSAGE COUNTY, this is a story of secrets and fears that eschews the gothic and grotesque for the achingly identifiable human, ON THE SHORE OF THE WIDE WORLD (the title comes from a sonnet by Keats) not only meets Pantsguys mission statement of bridging the gap between emerging artists and theatre professionals, but raises the bar for all theatre productions in the forthcoming year.