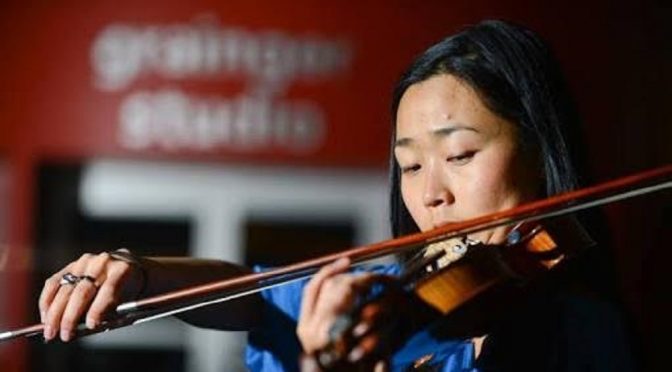 The first Master Series concert for the Omega Ensemble this year was a standing-room-only event at the Sydney Opera House’s Utzon Room. ” The crowd was treated to exciting versions of masterpieces for string quartet and clarinet quintet, as well as the premiere of Ben Hoadley’s new clarinet quintet, Broken Songs. ” A capable backbone for all items on the programme was the assembled string quartet of Natsuko Yoshimoto, Ike See(violins),Neil Thompson(viola) and Paul Stender(cello)

In general across all works this quartet securely delivered playing of precision and sensible dramatic depth. We were given an introduction to newer works on the programme and rediscovered well-known ones. A scintillating blend of individual expression resulted from this quartet’s balanced playing.

Each half of the concert began with the intensity of the string quartet then the second work opened up the dialogue to include David Rowden on basset clarinet. The clear textures and pleasing momentum present in each string quartet work were expanded to beautifully nuanced conversations between strings and the basset clarinet in each clarinet quartet.

It is this standard of eloquence and mastery of musicology which Omega Ensemble have always contributed to the tapestry of Australia’s concert life. A wide variety of concerts and artists are planned for 2017 and the group’s reverent directness in music making will once more promote the ensemble and chamber music as a whole this year.

If the audience included newcomers to the string quartet genre who expected the format to be in any way pedestrian, then they were in for a shock with the opening work. The kaleidoscopic fragments of structure and drama in Debussy’s String Quartet in G minor Op 10 were presented by this progressive quartet from 1893.

Ben Hoadley’s commissioned work followed. Its compact vignette or episodic structure contained exquisite atmospheric moments. This was in keeping with previous works by Hoadley written for Omega Ensemble. Modern pizzicato string effects were a highlight throughout.

The fine combination of basset clarinet and string voices as expertly written for and played by this quintet. In this programme the audience had to wait until the second half for the two classical works. This was worth the wait. The well-known gems of Haydn’s String Quartet No 53 in D major ’The Lark’ and Mozart’s Clarinet Quartet in A major K 581 were welcome places to go to for listeners.

First violinist Natsuko Yoshimoto showed excellent leading and lyrical playing in both works. The Haydn quartet’s famous first movement soaring themes were nicely graded. At no time was there overplaying during this performance. Subsequent movements showed individual and well characterised colours as demanded by Haydn’s ingenuity.

The Mozart Clarinet Quintet was a sublime excursion into this major work. Rowden’s playing through all registers illustrated thoroughly the capabilities of the authentic instrument.  The new tone colours resulting from the strings blending with the basset clarinet united with fine contour of line and interestingly nuanced moments. This work was as thrilling to hear live as on the 2016 recording with ABC Classics ISBN / Cat.No. 4814667 (below) The Omega Ensemble’s 2017 season consists of 16 events across 4 concert series. The next concert, Psycho: The Music of Bernard Herrmann takes place at the Art Gallery of New South Wales on March 5 at 7:00pm