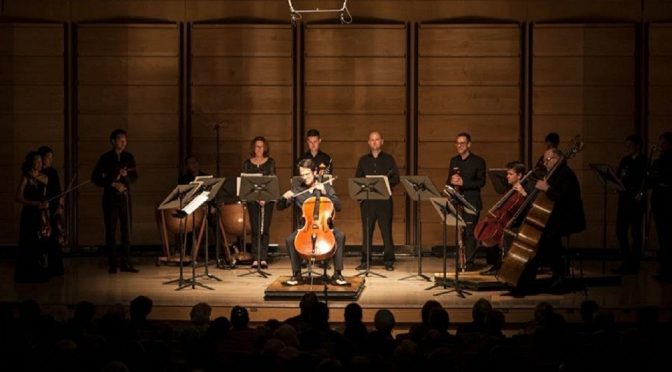 As we have come to expect from Omega Ensemble, this concert was once again intelligently programmed. Its sequence of works took us on a trajectory starting at the final year of Mozart’s life. This was contrasted immediately with a trip to the twenty-first century  before being hurtled backwards through the twentieth century to arrive at the treasured Elgar Cello concerto.

The concert started with a version of Mozart’s Fantasia in F minor K.608 (1791). This piece was transported from its original form as a work for mechanical organ to a performance for five string instruments, with five wind instruments and piano.

The result began this concert with precision of execution and a keen realisation of Mozart’s progressive dramatic potential. This combined with an exceptional level of ensemble blend and conversation, which continued throughout the evening. The central fugue was especially well looked after by these instrumentalists. Its progressive approach to fugal development was introduced to the audience with shifting texture and refined elaboration rich in expression.

The next two works were rich in expression and impact. Riffraction (2011) by Australian composer Mark Grandison for string quartet, clarinet and piano maintained a fine pace throughout. Fluid dialogues flowed across the instruments, allowing the organic growth of riff materials to be neatly and powerfully overlapped. David Rowden’s clarinet solos sat comfortably in a relaxed and beautiful environment amidst the continually tweaked tapestry.

Following this piece was another eclectic and clever work for six instruments. Guillaume Connesson’s Sextet (1998) with its borrowings from popular musics was conveyed with relentless energy and infectious character by the three string instruments, two winds and piano. Once again, David Rowden mastered an atmospheric delivery for his featured clarinet utterances in the work’s centre.

After interval Benjamin Britten’s Sinfonietta (1932) was deftly played by the ten instrumentalists. Leading us back to the early twentieth century, and to the start of Britten’s output, the work was commandingly played. Neil Thompson’s clear and energetic viola part, especially in the final Tarantella was a highlight.

A true highlight came with this concert’s featured work and virtuoso. In Iain Farringdon’s chamber arrangement of Elgar’s blockbuster Cello Concerto in E minor Op 85, the single instruments per orchestral part continued their exquisite blend maintained throughout every work in the concert. The fine acoustic of the venue coupled with this reduction of forces resulted in a visceral portrayal of this famous work’s colours and shapes.

Hylkema’s intense, exciting but refined cello playing was full of eloquence and unhurried emotion. The expression of Elgar’s gesturing such as the several strumming pizzicato moments was spaced with fresh individuality. The mixture of bravura, boldness and subtlety in this version and in this cellist’s sincere and skilled communication captivated the audience.

It was satisfying to see Omega Ensemble’s programming for this concert succeed so well. Audience members reacted to the new music and works by earlier composers with equal fervour.  Virtuosic group performance as well as keen, willing discovery and reaction from the assembled crowd filled the venue with an exemplary enthusiasm any concert would crave.