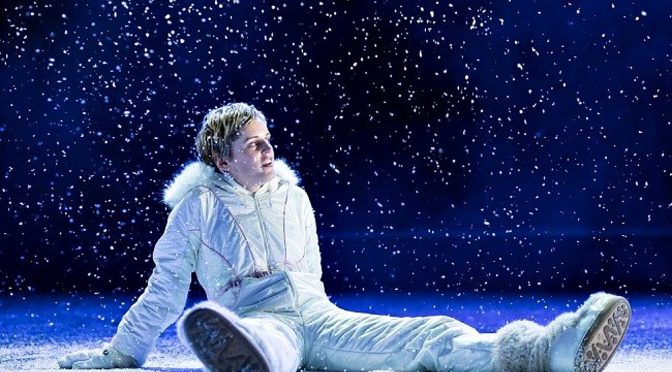 Divided into two parts and in total about 8 and  hours long, Tony Kushner’s multi award winning play ANGELS IN AMERCIA : A GAY FANTASIA ON NATIONAL THEMES, performed in two parts is set in America in the mid-1980s.

We see how In the midst of the AIDS crisis and a conservative Reagan administration, New Yorkers grappled with some huge social issues.

Part One is entitled Millenium Approaches and Part Two is entitled Perestroika. Both parts are given gripping, emotionally powerful performance by the splendid cast.

The issues it raises are still  relevant today, twenty five years after the work was first performed. It is a sweeping epic about gay rights and gay responsibilities, loyalty, religion, politics, guilt, and the failure to live up to the expectations of oneself and others.

There are also lots of use of metaphors and at times some very witty dialogue, contrasted with some searingly emotional scenes and very powerful acting.

Under Marianne Elliott’s fluid, imposing direction characters appear in each other’s imaginary worlds .The action in the real world are delineated in cubicles outlined with neon tubes (designed by Ian MacNeil) and they slide back and forth, and there is much use of the revolve, to illustrate the connections between characters. We jump from posh New York apartments to hospital rooms, Antarctica and elsewhere.

In Part Two for the angels scenes there is a breathtaking large dome basilica like structure . Perestroika becomes meta-theatrical, with its angelic re-enactments and Mormon model theatres and by the time Heaven is revealed, it becomes obvious we are backstage with a host of angels operating the blockbuster that is humanity on Earth. Illusion and reality are blurred at times – are Harper’s and Prior’s ‘visions ’ real or drug induced ?

The cast is amazing, the leads are exceptional. Andrew Garfield (the eponymous character in the film The Amazing Spider-Man) plays Prior Walter, in a luminous, finely nuanced performance of incredible range. In Part 1 Prior has just discovered that he has AIDS, and fights and pleas for love and LIFE. In Part One he is intense and flamboyantly searing, there is a great scene with a Norma Desmond like monologue. In Part 2 we further see his strength and grim yet panicky determination to survive and he has a striking battle with the Angel.

Verbose. handsome Louis Ironson his lover is wonderfully played by James McArdle. Louis feels extremely guilty about running away from Prior when he was most needed. Over the two parts we follow the unfolding of their relationship.

Roy Cohen was terrifically played by Nathan Lane. The Attorney was a closeted gay man who died of AIDS while insisting he didn’t have it. He is presented as tyrannical, bossy, ruthless and abrupt, bullying, power hungry, extremely arrogant and coldly self centred . Part patriarch and part predator he is in denial about his illness and believes power and clout can solve everything .In Part Two we see his slow decline into an agonising death and how he confronts it .

Joe Pitt, the closeted Mormon lawyer Roy Cohn recruits to be his henchman inside the Justice Department, is given a fine, sensitive performance by Russell Tovey. His long-denied sexuality is one of the main causes of his wife Harper’s stress and emotional instability.

Nathan Stewart-Jarrett is fabulous as the gentle, practical and pragmatic Belize, the nurse and ex drag queen who has delicious dry wit and great poise who cares deeply.

Kushner uses metaphor and unhappy angels, who – especially in part Two – suggest that they have been deserted by God, are doomed to boredom and that humankind has to sort out its own problems. Amanda Lawrence as the main, rather terrifying Angel of America, with a tattered American flag , has huge spreadeagled wings and is supported by a menacing group of looming spectral shadow helpers who swoop and reassemble her and spread her wings out .

Brown also hauntingly gives a terrific performance as the ghost of Ethel Rosenberg who arrives to gloat over the troubles of her nemesis Roy Cohn and is inveigled into singing and saying the Kaddish prayer over his dead body with Louis.

Elliott seeks to express the abstract ideas and attempts to take us with Harper and Prior’s suffering to “the threshold of revelation.”, trying to uncover the meaning of reality itself. In our turbulent, frightening times where both God and Marx have been declared dead,

Kushner’s epic play shows that there is still hope in the strength of the human spirit and our instinct for survival .