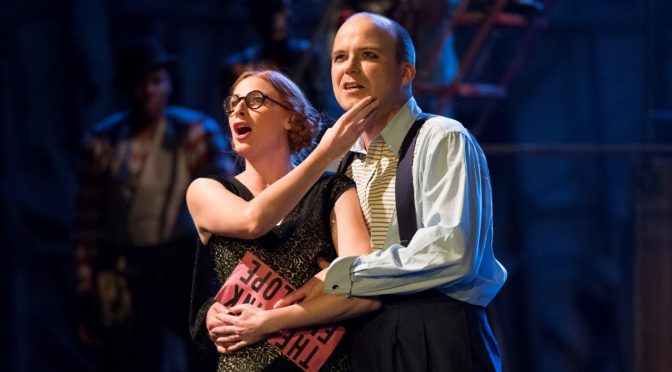 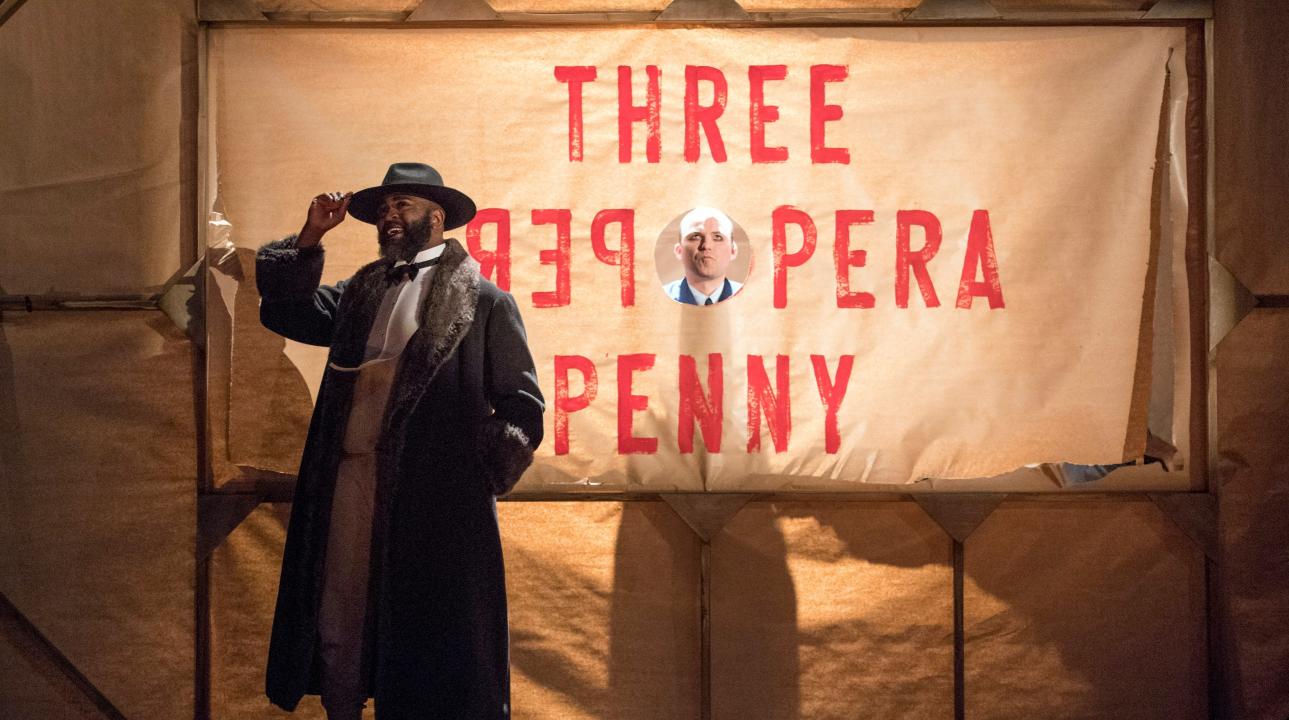 kThis latest offering as part of the NT Live wonderful season is dark, disturbing and compelling.

The social comment and context is extremely important. Directed by Rufus Norris and adapted by Simon Stephens much is made of the savage despair of Brecht and Weill’s era and the ‘skint people ‘.

THREE PENNY OPERA tells the tale of how Macheath brings down the Peachum’s wrath on his head by marrying their daughter Polly before going on the run through London’s dismal brothels, with his former lover and one time collaborator Chief Inspector “Tiger” Brown in hot pursuit.

In Vicki Mortimer’s fluid ,very flexible designs everything looks as if it comes from a bedraggled puppet show. The set has lots of what appears to be paper thin coverings and wooden struts. Much is made of the huge revolve and moveable staircases sliding in and out.

There is plenty of dramatic lighting from underneath which helps to give the actors’ faces an eerie look.

The rubbery corrupt police are very Keystone Cops. The props are labelled in big white letters, entrails of wool are used, Kabuki like , when someone is stabbed. Action is crowded to the front of the stage.

As the charming, Machiavelian murderer Macheath or  Mack The Knife, Rory Kinnear with his cold, compelling eyes and pencil thin mustache was brilliant.

Rosalie Craig brilliantly portrayed the plain, bespectacled Polly Peachum (Mrs Macheath). Strong willed she knows who and what she wants and can handle Mac’s business most efficiently when he is ‘away’.  Craig brings the house down with her rendition of the Pirate Jenny song.

Her catfight with Lucy ( Debbie Kurup, smouldering in and hotpants and afro ) was electric and another highlight of the evening.

Mr Peachum, Polly’s father, as portrayed by Nick Holder was astonishing and rather frightening. This Mr Peacham was full of malevolent control, evilly manipulating everything with chilling menace. An overweight, leering Herod, he wears a pinstripe suit with princess heels and is bald in Act 1 and in Act 2 wears a black bobbed wig with coloured streaks. For this man knowledge and secrets are power .

Mrs Peachum, played by Haydn Gwynne, is an aloof yet sultry, lascivious drunk. Dressed very elegantly in the style of movie stars of the period she is thin and angular. She brandishes a tin clearly labelled DRUGS to tempt Jenny and screeches Interval ! when the time comes.

Then there is poor Jenny the drug addicted prostitute (Sharon Small in a magnetic performance). Her Surabaya Johnny ( interlopated from Happy End) was marvellous .

The Balladeer was magnificently played by towering George Ikediashi ( better known as his cabaret alter ego, Le Gateau Chocolat ) with his glorious, rumbling velvet extra deep bass .At the end he acts as the Deus Ex Machina on a crescent half moon, becoming the King’s messenger bringing news of Macheath’s unexpected last minute reprieve and unexpected good fortune.

This production is also distinctive , because it’s so rare, to see a wheelchair using actor, Jamie Beddard, included in the ensemble as The Shadow.

With  this production we are presented with a cynical vision of a coldly indifferent society struggling under the weight of pinching austerity. We see London’s corrupt underbelly and its vigorous , defiant characters.

The NT Live’s presentation of THREE PENNY OPERA  will screen at selected arthouse cinemas from November 12.