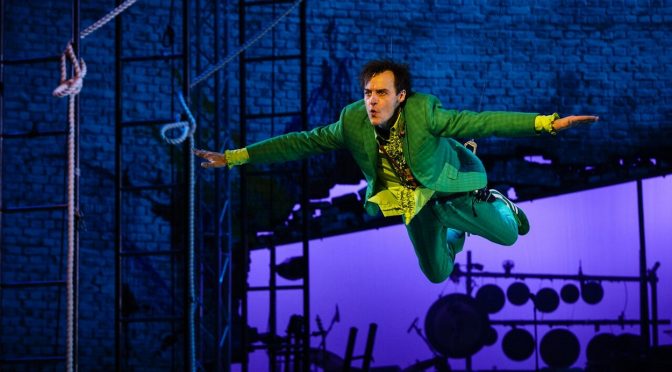 Bold , striking and original this is a sensational reworking of JM Barrie’s PETER PAN as part of the NT Live series .It was a co-production with the Bristol Old Vic , as directed by Sally Cookson. It is enchanting and is at times childlike and playful, vibrant and colourful, at others quite melancholy ,or dark and sinister . The ending is extremely moving . There is a haunting sense of loss and of the wearing away of innocence.

It is not a ‘traditional ‘ panto version , rather it has an exuberant athletic circus feel at times and yes the flying is spectacular ( with ‘fairy strings’ to help) . Michael Vales’ relatively sparse , simple staging in the early stages of the show – a bed and a stepladder are the only on-stage furniture in the first scene in the bedroom of the Darling family home –becomes more complex and detailed as the play progresses. The fact that the counter weights and ‘fairy strings’ are visible does not discount in any way from the magic. Peter’s missing shadow is an ingeniously cut green sheet.

There is effective use of the revolve . Neverland becomes a colourful paint spattered circus like playing area where various props can be slid in/out/used and the arrival of the pirate ship from the depths was a most spectacular coup de theatre and the crocodile ( sort of an alien corrugated pointy vacuum cleaner with glowing red eyes ) is quite scary .

When the Darling children fly off with Peter, black-and-white cards conjure the London rooftops, undulating ribbons suggest the sea and coloured globes become planets in a delightfully enthralling sequence . In Neverland the Lost Boys make use of found objects so that bicycle pumps become radars or walkie-talkies and tin cans turn into telephones and binoculars. There are also wonderful mermaids. Musically it is a mix of jazz,pop and reggae.

The show opens and closes with the adult Wendy and her daughter Jane with Wendy dreaming with her young daughter about the time when she and her two brothers were whisked away by Peter Pan to meet the Lost Boys.

Peter Pan himself (Paul Hilton) is a lanky charismatic adult in a vibrant bottle-green suit, like a Rosella parrott or leprechaun , in some ways reminiscent of Papageno perhaps ( ? note the pan pipes) , with rock star self assurance , arrogant , petulant and cocky , trapped in a permanent state of arrested just -adolescence and naively innocent about growing up and sex.

Which at least partly explains why Madeleine Worrall’s Wendy gets quite annoyed with him for failing to grasp the truth behind their adult charades. His diatribe against Mothers emphasises the fear Peter has about the terrible things mothers do , making you love them, but then as soon as you fly out of the window they put bars on it and you can’t get back , emphasising his loneliness and longing.

Worrall ( Cookson’s wonderful Jane Eyre previously ) is a feisty , responsible , pragmatic Wendy, in striped pyjamas , disturbed by the pressures of becoming a reluctant ‘mother ‘ to a boisterous troupe of Lost Boys.

Mischievous , darting fussy Tinkerbell ( with stylized feathers for ‘wings’ and a fairylight headdress) , jealous of Wendy ,was enchantingly played by Saikat Ahamad who speaks his own special Fairy dialect .

Anna Francolini as Mrs Darling is delightfully charming , but she also has a wonderful time stealing the stage as an evil , scheming punk Goth Hook – in a huge purple crinoline , large black wig and very high boots and a black glove where her hand should be and shark like glittering silver teeth.She bravely meets her end by crocodile. As Hook, Francolini is sometimes surprisingly melancholy and yearning yet at other murderous and malevolent ( ‘Pirates don’t have teddy bears ‘).

Felix Hayes’ rather wet and henpecked, harassed Mr Darling sulks and stresses, acts a bit as if he wants his wife to be his Mother and refuses to take his medicine .He has much fun as Smee the pirate.

Lois Chimimba is menacing and fiery as Tiger Lily, an unpredictable dreadlocked Glaswegian , perhaps menacing but overall friendly with Peter . She is ringed by wolves: actors with masks and on crutches (a reference to Anthony Sher’s Richard 111? ) who prowl and slither ominously.

Ekow Quartey as Nana the dog is delightful , a large brawny man in a frilly white pinafore that shivers when he shakes or is offended because he has to act like a dog.

This simultaneously joyous yet very moving National Theatre version concentrates on the theme of parenting but it also remains faithful to the major issues of abandonment , childhood loss and the awkwardness of growing up.