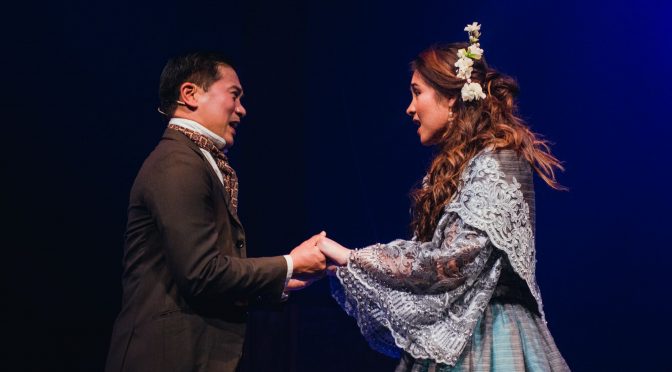 In this beautifully lyrical tale of love and struggle against oppression a highly talented cast draws the audience into this tragic yet uplifting story set at the tail end of the Spanish colonial period of the Philippines. It is based on the Philippines’ national novel Noli Me Tangere (Touch Me Not) by Dr Jose P Rizal. There are several themes intertwined through the musical – the love between a man and a woman, the patriotism of the Philippines, what people will do for their country and the controversy and power of the Church.                   The cast is wonderfully  lead by  Miguel Castro as Crisostomo Ibarra, a man who returns home after spending several years in Europe his mind filled with ideas about how to better the lives and futures of his people through education. He strives for social reform but is confronted by the state of his country under the regimented and barbaric Spanish rule and particularly the power of the Church.

Susana Downes is equally impressive with a stunning clear voice as the strong and sweet Maria Clara, his true love. Marcus Rivera is excellent in role of Elias, a tough rebel who befriends Ibarra whilst on the run. Chris Hamilton shines as the evil Padre Hamilton with David Hooley as an equally subverted Father Salvi. Lena Cruz portrays great emotional depth in her role of Sisa, a mother in search of the truth about what became of her children. Sean Perez has just the right touch of support and friendship in his role as Ibarra’s friend Tarsio .

All members of the ensemble, including several dancers in gorgeous costumes choreographed by Novy Bereber, more than ably support and breathe life into this dream of a man changing his world through reason and education not violence and revenge.

Featuring music and lyrics by Allan McFadden and book and lyrics by Peter Fleming, director Aarne Neeme draws the best from the cast. Listen carefully to the lyrics to get the most of out of the beauty and truth of words and allow yourself to fly with the music of this production, under musical director Allan McFadden – the themes of the story are as relevant today as in the era in which it is set. Recommended.