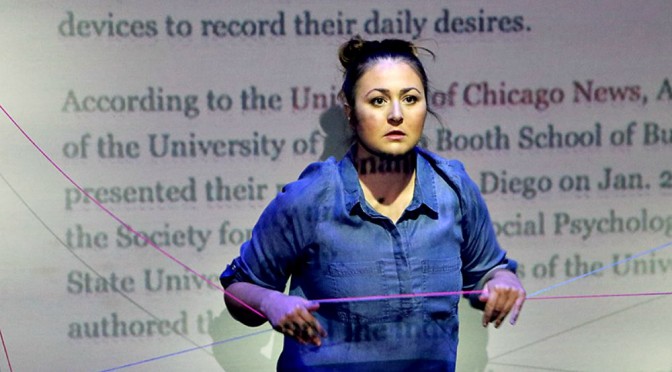 Back in the early 90’s anyone seen walking down a street chatting into a small brick sized device held to an ear, was seen as a ‘poser’. I remember some friends being concerned that the overnight charging of the said small brick was a potential fire hazard. My friends also had fire blankets, a bucket of sand and fire extinguisher in every room of their house so that they were well prepared if the said brick did catch fire.

Fast-forward two decades and to not have a mobile phone welded to your hand and an online profile is now to be the weird one, labelling you a veritable Luddite.

A quick glance at statistics shows that mobile phone ownership took off around 2004, the same year Facebook was founded. So much has happened in ten years and we are going to see so much more in the next ten.

Continuing their proud tradition of contemporary group devised work TANTRUM, in conjunction with Paper Cut Collective, at their home base, the Civic Theatre, Newcastle, has honed in on the mobile phone and internet culture and how the exponential ownership and use of phones and tablets has enabled us all to be massively connected on line, but potentially increasingly disconnected in reality.

Paper Cut Collective (Sarah Coffee, Tamara Gazzard and Lucy Shepherd) are experienced creators of dynamic theatre that addresses our consumerist society mores, using impressionistic and symbolic techniques, dance and physical theatre to engage us in a theatrical journey that doesn’t necessarily pass judgement, but does provoke and encourage thought.

They were joined by other emerging artists Zoe Anderson, James Chapman, Emily Daly, Sam De Lyall, Britt Ferry, Jocelyne Lamarche and Jemima Webber to work collaboratively over 18 months, to develop the work, drawing heavily on their own real life experiences.

The event starts in the foyer with dancing and v-blogging. Once seated we are bombarded with rapid fire images from the internet, many of them featuring cats, scrolling repeatedly then morphing into questions from the UCLA Loneliness Scale.

I feel left out.
I feel starved for company
No one really knows me well.
It is difficult for me to make friends.

The message is clear from the start. Being connected online is potentially creating a society of isolated individuals who feel increasingly disconnected in their non online life.

The production is distinctly non-naturalistic and otherworldly in appearance and the atmospheric lighting, designed by Lyndon Buckley, creates a sense of being inside the network of technology. Neon coloured balls of wool are used to paradoxically symbolise connectedness and being trapped in the web and the torch app on mobile phones takes on a whole new symbolism in terms of illumination.

Another effective and striking aspect is their use of movement and dance, supported by a diverse and engaging soundtrack designed by Jess Blackburn, Julia Rutten and Melanie Coombes. Techniques like tapping feet representing fingers tapping the keyboard and the “Selfie” Ballet set to classical music both ooze cleverness, though the random dance to Uptown Funk was puzzling and overlong.

Another overlong sequence was a segment with every sentence prefaced by “No one cares about…” Some of the endings were spot on; we really don’t care about your food or your gym workout or how many repetitions you did, but the preface could suffice for several witty observations in a row.

The performance ensemble comprising Tamara, Zoe, James, Sam and Jemima are talented, well balanced and have a strong sense of ensemble. They confidently take us on an atmospheric and emotionally diverse journey. The 6th member of the ensemble exists solely online – Spot Marion, a cat, apparently deceased but still functioning as a type of web guru for the confused or concerned.

And theatre etiquette is refreshingly upended in this production. We are asked to keep our phones out and use the torch app to answer questions.

The floor set is marvellously simple with some wonderful triangular shaped blocks, courtesy of Tobias Horrocks from Freefold Stools, integrated into the general choreography to create podiums, catwalks and a multitude of platforms and spaces. I know many a drama teacher would covet those blocks.

Three large screens presenting projections, designed by Tim Buchanan and with artistry by David Lobb, that are employed to support the ideas and action, create extra complexity and intensity as well as provide a backdrop for much of the action. A particularly striking scene involves a paper fold cat mask, designed by Steve Wintercroft and worn by Sam De Lyall, being strolled across the floor in sharp relief on the backdrop.

If you want to know the five rules of how to be popular on Facebook, see yourself dance and be encouraged to use your phone during a performance, then NO ONE CARES ABOUT YOUR CAT is worth a visit. Even if none of the above apply to you, this well developed, cutting edge contemporary and thought provoking work will keep you entertained and engaged.

A co Tantrum and Paper Cut Collective production , NO ONE CARES ABOUT YOUR CAT is shortly to have a season at ATYP’s (Australian Theatre For Young People).

Well worth a visit, NO ONE CARES ABOUT YOUR CAT will play ATYP Studio 1, Hickson Road, Walsh Bay  on Wednesday 30 September, Thursday 1 October, Friday 2 October and Saturday 3 October at 7pm.