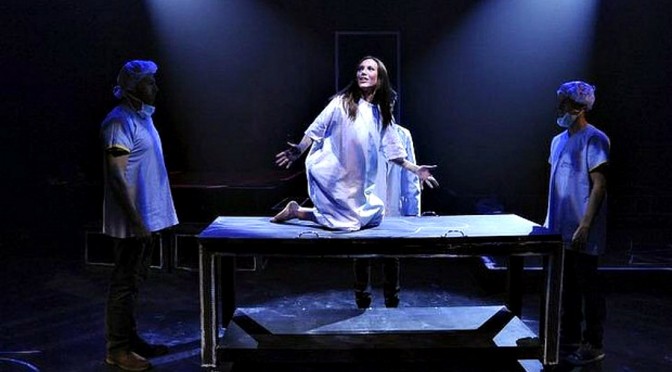 A normal suburban family is presented to us in the first few minutes of the opening. Diana (Natalie O’Donnell) is protecting her curfew breaking son, Gabe (Brent Trotter) from the attention of his father Dan (Anthony Harkin). Their teenage daughter, overachiever Natalie (Kiane O’Farrell) feels pretty irrelevant to this happy family. And we soon see why. The act of making sandwiches becomes a bread slice pathway into a disordered mind.

Diana is not right. Diagnosed 16 years ago with bi-polar disorder she is struggling for clarity in the everyday. Dan protects her fiercely and well, Gabe is her solace and calm and Natalie? Well… Natalie just shuts down, eventually being drawn to stoner bad-boy Henry (Clay Roberts). Like mother like daughter. Henry is perfectly placed to help Natalie to self-medicate away her disenfranchisement. Not that psychopharmacology or doctors (played by Alex Rathgeber) are helping Diana. Options rapidly spiral down to Electro Convulsive Therapy and that decision is made as we leave for interval.

With music and lyrics by Tom Kitt and Brian Yorkey, NEXT TO NORMAL began life in 2002 as a workshop about a woman receiving ECT. Arriving on Broadway in 2009, it broke box office records and received 3 Tony awards after a Twitter campaign serialised the libretto. The show continues on tour in the US and has a substantial international presence. It’s a tough story to witness and I was so sure that I didn’t want to go back after interval. I did not want to see Diana after they did that to her.

This strong reaction is at the heart of my confusion about the dancer or the dance. As Diana, Natalie O’Donnell is extraordinary. It’s a great role as written. But that’s not what does it. It’s the physicality of her performance which inserts the viewer into Diana’s psyche.

O’Donnell has such command of her slight, almost frail, frame that she vibrates with the internal struggle. Director Darylin Ramondo often allows her to stand still, drawing power from the moment and harassing the bugs under the skin. In the same way, the bow drawn cello from the orchestra hidden behind the set vibrates mournfully to set nerve endings raging.

This emotion is a combination of the score as written and the superb musical direction by Alistair Smith. The violin wails at moments, discordant one note piano represents a music box and a glockenspiel evokes memory. The music has light and shade and even a patter song and a hoedown echo and a waltz. The level of the band is terrific and it is with great pleasure to say that the volume was the best I have experienced at the Hayes for a long time. The operation was not so good on the night I saw the show but it is a tricky music to mix. There is a lot of chest voice from the cast and in keeping with the rock opera feel, the dialogue often has recitative resonances.

All the cast are up to the challenge of the music and the voices are strong. This is especially clear in the six part finale song “Let There Be Light”. Clay Roberts as Henry has the best written arc of the show and he travels it well. We see the boy then the man he might become.

Brett Trotter as Gabe has a difficult role but he uses his focus and eyeline to clearly elucidate the boy his mother believes him to be. His duet with his father “I Am the One” is skilfully directed to draw their relationship to its conclusion.

Dan, the father, is not as well written as the other characters. Though we learn about his motivation in Act 2, he is hard to relate to- too sympathetic, too stalwart-but Anthony Harkin injects enough extra into his interpretation that we sense the seduction that Diana’s suffering engenders in him.

On the other side of the coin, Natalie is very well written but not so well interpreted. I found Kiane O’Farrell too mannered and broad for a girl who convinces herself to believe that she just wants her mother to go away.

Diana’s initial diagnosis was in a time when bi-polar was a catch-all phrase for lots of different syndromes and the archaic nature of that kind of psychiatry is reflected in the set for this show (Jolyon James/Darylin Ramondo).

A kind of analogue version of a modern power point, there are boxes outlined with straight lines and a raging blackness pervasively reflecting the heart of the illness. Symbols are juxtaposed. A heartbeat and a love heart; a family portrait gallery with no portraits; scribbling and erasures.

Lighting designer Martin Kinnane has created a ‘vision in blue’ using a moody, restrained colour palette. His use of aqua for Gabe is a perfect choice yet, he too paints in the back and white of the set. He often floods the stage with white light from the sides, no pools.

In the end, I suppose, it doesn’t really matter what it was that flooded me with the feelings I had during NEXT TO NORMAL. Now I am going to buy the album and get the music in my head. Once this has been accomplished, I want to see Doorstep Art’s interpretation again. Whether it’s the work or the production, I will still have O’Donnell’s dance to experience!