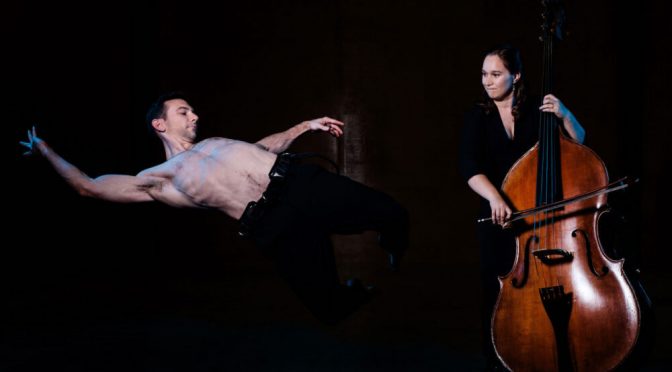 NEXT CHAPTERS : UPLIFTING ORCHESTRAL MANOEUVRES was a three-company collaboration presenting works by new and old composers. Willoughby Symphony’s  Artistic Director Nicolas Milton has combined the Orchestra, the Willoughby Symphony Choir and Legs on the Wall, the  much-loved physical theatre company, for this community event.

The result was a crowding pleasing evening.  Conductor Sarah Penicka-Smith expertly held it all together, guiding the three companies  through the four works. The Concert Hall atmosphere was buzzing with children, teens and supporters. It fitted so well with the lively Saturday night atmosphere at the Chatswood Concourse.

While waiting for the show to begin, one of the cellists waved from the stage to friends in the audience. The 39 Choristers opened the first piece with enthusiasm as the orchestra and choir performed Alice Chance’s new work ‘Holy Dreaming’. This short piece was commissioned by the Choir of Trinity College in Melbourne and is based on a ‘A Thanksgiving for Australia’ by Rev. Lenore Parker.

As the choir sang ‘and the gum tree grew in the vast desert and dense forest and in the cities at the water’s edge’, an aerialist from Legs on the Wall appeared and writhed upwards on a blue-lit platform in front of the orchestra and swung spectacularly across the stage and over the stalls. She released a long orange and black cape that trailed all the way down to the audience. The music was forgotten as the audience was enthralled by  the expert aerialist.

The next piece was Australian Elena Kats-Chernin’s ‘Five Chapters’ for a saxophone quartet with orchestra. This soprano, alto, tenor and baritone sax combo, Nexas Quartet,  was a delight, especially Michael Duke’s opening soprano sax solo with lively and frequent staccato.

Next was ‘Phoenix’  by Joseph Newton, a 20 year old  winner of the 2021 Young Composer Award. In his program description of the piece Joseph writes, ‘Feel free to interpret the meaning in whatever way you are comfortable with.’ For me, it was a delightful nine minutes that had hints of Shostakovich.

The final piece was a Shostakovich’s piece, ‘Ninth Symphony’, written to be a celebration of the Soviet victory over Nazi Germany. At Stalin’s command, the piece was censured for its ‘ideological weakness and its failure to reflect the true spirit of the people of the Soviet Union’.

We at the Chatswood Concert Hall last night loved the big brassy, military drums and vibrant beats. The music put us in the mood  for Shostakovich versus Stalin and then two aerialists flew over the orchestra, and we forgot the music again.

We watched the action in the air and on the runway between the orchestra and the conductor.  One aerialist looked at his watch and gestured that the other aerialist on the other side of the stage was late. They swung together, danced, posed, embraced, and made other comic gestures that seemed to have little to do with the music.

The aerialists were Jana Castillo and Todd Sutherland. Stage side was a tower with a heavy counter weight that two others from Legs on The Wall pulled up and down.  It was seamlessly done on a pulley system.

Legs on the Wall has been performing for 37 years and its work is creative, emotive and fun.

There were only two performances.  A real shame. This was a big tick for the community, a harmonious, resonant, inspired collaboration of three artistic companies that was a genuine crowd pleaser.

NEXT CHAPTERS : UPLIFTING ORCHESTRAL MANOEUVRES played the Concert Hall at the Concourse, Chatswood on Saturday 22 May, 2021 at 7pm and Sunday 23 May, 2021 at 2pm.