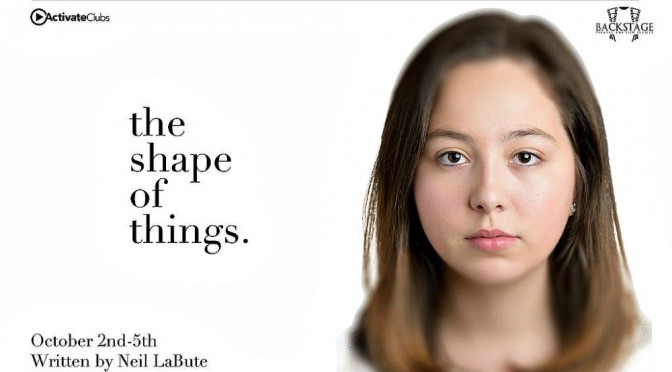 It is no accident that American playwright Neil LaBute’s THE SHAPE OF THINGS is on the HSC Drama syllabus. It is a play to be acted not read. In her program notes Emily Burke, directing it for Backstage at UTS, refers to this production as a ‘living piece of theatre’. And so it is. It is very well lifted off the page.

The piece begins and ends in a visual arts gallery. Evelyn, a visual arts student, is lurking around a male statue featuring a fig leaf with a spray can and intent. She has crossed a line before we even know her.

Evelyn attracts the notice of Adam, a diffident and daggy security guard who wants a quiet time until the end of his shift so he can get to his next part-time job in a video store. He is majoring in student loans whilst being an ‘English Lit Prick’.

After he manages to encourage her back over the line, Adam overcomes his natural shyness to ask Evelyn out and they begin a relationship. Watching on as the art student changes and manipulates Adam are two other students. Jenny is Adam’s previous girlfriend and she is engaged to Phil who is supposed to be Adam’s friend. Evelyn’s machinations reach out for these two as well.

With settings, characters and themes concerned with education and a human being’s infinite capacity for improvement, this play is a great fit for a University Drama Society. Obviously the ages suit, but there is something else. The venue and the staging support the audience contribution to animating this text.

The use of a sterile white TV studio and a traverse stage with full white light puts the audience on display as they respond to what they see. There are no wings and nowhere to hide. Everything and everyone in that room is pulled into the reality created there.

Props are all on display, characters change clothes on display, the cast sit in the audience, on display, when not involved in the action. The staging is reduced to 8 unvarnished ply boxes which double as bed and table, art works and plinths. Easily seen as Theatre of the Poor, this simplicity is a directorial choice to make the viewer respond with their intellect rather than their emotions. We see this in the opening sequence. In the play’s shocking revelation the responder will know whether they believe the high ground to be moral or artistic.

The venue does have one drawback though. Some of the cast have slipped into film performance rather than the bigger acting and slower more articulated voice that is required for a cavernous space. This is particularly noticeable with Rhiona Armont as Evelyn who has the most difficult verbal burden of the play.

Not withstanding this, most dialogue is clear in character and intent. The laugh lines are well delivered, especially by Benjamin Gageler as Adam and Claudia Coy has created a nice little character in Jenny. James Manera as Phil uses his height to advantage to look down on Adam. All the cast are present and alive and the committed acting pulls the story from the page to create a riveting piece of theatre.

This is a Uni  production but don’t let that put you off seeing this show. This Backstage Theatre Society’s revival of Canadian playwright Neil LaBute’s 2001 play THE SHAPE OF THINGS is currently playing UTS’s Bon Marche Studio, Building 3, 755 Harris St Ultimo. There are two more performances, tonight (Saturday) at 7pm and Sunday night at 7pm.