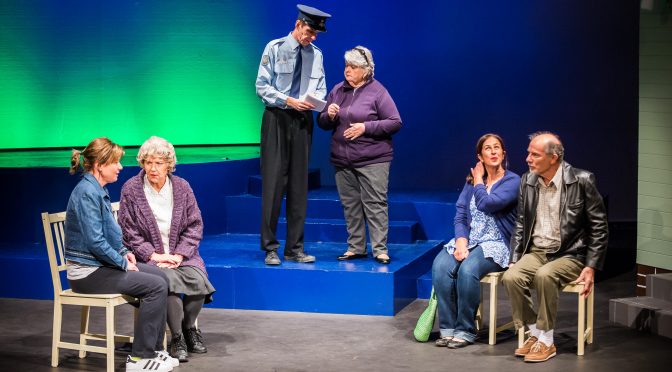 NEIGHBOURHOOD WATCH by Lally Katz takes place in the year between Kevin Rudd’s election as Australian Prime Minister and Barack Obama’s as US President. It is based around the development of an unlikely friendship between Ana, a battle hardened Hungarian immigrant, and Catherine, an out of work actor waiting for a better world.

Ana, played with great energy and enthusiasm by Margaret Olive, is a scratchy old woman stuck in her past, bitter about her experiences and often refusing to see the good in people. She meets her neighbour Catherine, played elegantly and with feeling by Jacqui Wilson, who is also stuck in her past as she cannot let go of her ex-boyfriend.

NEIGHBOURHOOD WATCH is both a comedy and a drama with hope, death and a rather nasty dog. Ken, played with a strong but gentle hand by Ben Freeman, is Catherine’s flatmate who wants to be a film writer, but spends most of his time playing video games and watching the TV serial The West Wing. The ensemble of Michelle Masefield, Bob Parsons, Annette Dix, Stijn Vermeulen, Marilyn Parsons and Axel Smit play an assortment of characters making up the neighbourhood and filling in the stories as an understanding and friendship grows between Catherine and Ana. All the actors work very well together to bring life and colour to the play with several scenes taking us back to Europe in the mid-twentieth century as war destroys Ana’s life.

Catherine’s life is transformed by Ana’s stories of an almost forgotten world as, through her new friend’s eyes, she witnesses the horror of war, the trauma of refugee camps, and the struggle of settling in a foreign land. In turn Ana is given the precious gift of friendship at a crucial time her lonely life.

Director Emma Widenstrom keeps the tempo of the play moving along as the many short scenes flow smoothly from one to the next and the comic scenes mix with the darker elements. The clever set design by Paul Sztelma and lighting design by Sean Churchward, allow characters to move quickly from one place to another and one time to another.

For a touching but not sentimental journey thorough Australian suburbia go see NEIGHBOURHOOD WATCH, which is part of Castle Hill Players [Facebook]  2018 season, playing at The Pavilion Theatre Castle Hill Showground till 18 August.