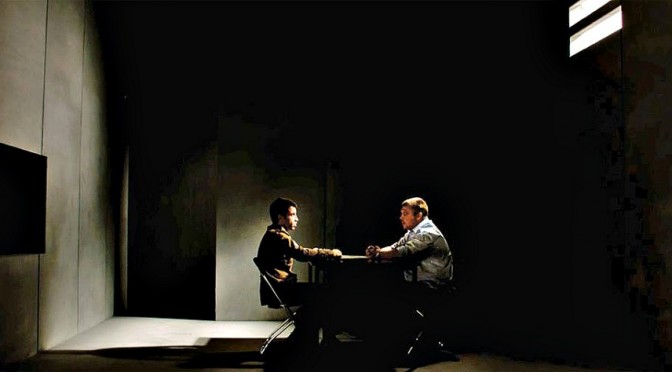 THE GREEN PRINCE is Shakespearean in its gripping portrayal of humanity’s eternal themes – family, love, identity, trust, hope and betrayal – a staggering achievement for a documentary which is essentially a two-hander.

Directed by Nadav Schirman, THE GREEN PRINCE tells the tale of how Shin Bet operative Gonen Ben Yitzhak recruited the young son of a Hamas founder, Mosab Hassan Yousef, to spy on his own father.

Mosab on camera is so wide-eyed and sincere that he comes across as almost an innocent even after all that has happened, while the bull-necked Gonen comes across as entirely manipulative before becoming fatherly towards his charge.

Over the years and despite subterfuge which sees Mosab sent to a brutal prison “for his own protection” and Gonen eventually expelled from the Israeli security service which he regards as family, their love for each other deepens and becomes a force for good against the brutal backdrop of Middle Eastern terrorism and counter-terrorism.

When Mosab finally finds himself in a dire predicament, it is Gonen who saves him.

Director Schirman says, “I found their connection so full of hope, in the sense of ‘See what happens when people dare trust one another and go against pre-conceived notions

The potency of THE GREEN PRINCE’s themes and the way in which Schirman explores them means the film is a far greater achievement that its simple structure would suggest.

The movie’s structure is merely that of a couple of talking heads interspersed with material that is, at its worst, showing generic spy-camera footage a la Spooks and Homeland and, at its best, when it lets us see historical film of Mosab in Ramallah shot while he was operating undercover.

It’s therefore slightly naughty, as well as self-defeating, for the publicity blurb to go over the top and call it “a multi-layered psychological thriller … a spy thriller that will have audiences on the edge of their seats.”

Nadav Schirman ‘s THE GREEN PRICE screened as one of the premiere films at this year’s Jewish International Film Festival with the director in attendance as a Festival guest.

This important film is getting a mainstream release in Sydney from next Thursday 4th December. For more information visit the website- http://www.musicboxfilms.com/thegreenprince.