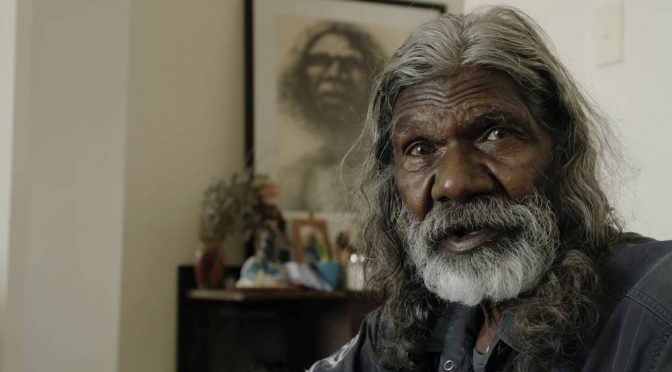 There is an arresting image at the very start of the film where a wild emu follows David Gulpilil as if drawn by some strong spiritual source. Despite the fact that cancer is ravaging his angular body, he is still with us.

Gulpilil was the foremost indigenous dancer of his time and, in his own words, “the best dancer in the world.”

He spoke of his love of appearing in films and how easy and free his relationship with the camera was.

It is remarkable to consider that Gulpilil first appeared on the screen when he was 14. It is also remarkable that he was able to attend the red carpet world premiere of this documentary at the age of 63 at the Adelaide Festival in 2020.

Due to his supreme self confidence he regarded this film of his life as starring him because nobody else could play him.

Gulpilil now lives in Murray Bridge in South Australia to be close to specialist medical care.

Despite the devoted attention his carer Mary gives to him in some very touching scenes, Gulpilil still yearns to be on country and indeed has planned his funeral to take place in the Northern Territory near where he was born. In a surprising image there is a scene of Gulpilil lying in a suit and tie in a coffin with strips of celluloid strewn about his ‘corpse’ and coffin. Then his eyes spring open. I doubt that a traditional, indigenous funeral would be conducted in this way and I think this is an example of Gulpilil’s dark sense of humour.

Another startling aspect of Gulpilil’s creativity, and another manifestation of his spirituality are his beautiful paintings, many of which are in the collections of the Art Gallery Of South Australia.

As I attended the AACTA screening of this moving documentary, there was a panel discussion after the screening, where the panellists reminisced as to fond episodes in their interactions with Gulpilil.

Director Molly Reynolds stated how enthusiastic and involved with the documentary and, on some occasions, directed  segments of the film himself. There are haunting scenes in the film of Gulpilil standing as part of the outback. Overcoming his illness Reynolds said Gulpilil himself would drive to the locations where the most evocative shots could be filmed.

Acclaimed director, writer and actress Leah Purcell recalled that when they were together in Washington DC Gulpilil expressed the hope that their accommodation would include a backyard so that he could build a campfire around which to eat and tell yarns.

Grant Page appeared with Gulpilil on nearly all his films as a movement and stunt choreographer and cheered up when he recalled their history together.

Prominent portrait artist Craig Ruddy painted a portrait of Gulpilil which won both the Archibald Prize and the People’s Choice Prize in 2014, a unique feat in the Prize’s history. As a sitter he found Gulpilil engaged, relaxed and cooperative. Occasionally, much to Ruddy’s amusement, Gulpilil would go walkabout.

Acclaimed Director Neil Armfield spoke about staging a one man show in Adelaide featuring Gulpilil talking about his life. Despite the fact that Armfield and Gulpilil had agreed on a script that was to be performed, during the performance Gulpilil would go off on tangents, which Armfield said he loved.

If you have ever been an admirer of David Gulpilil’s work over his long career you should go and see this documentary which is, in a way, his last will and testament.

MY NAME IS DAVID GULPILIL is in cinemas now.

Images by Ben Apfelbaum except for the featured image which is a still from the movie.