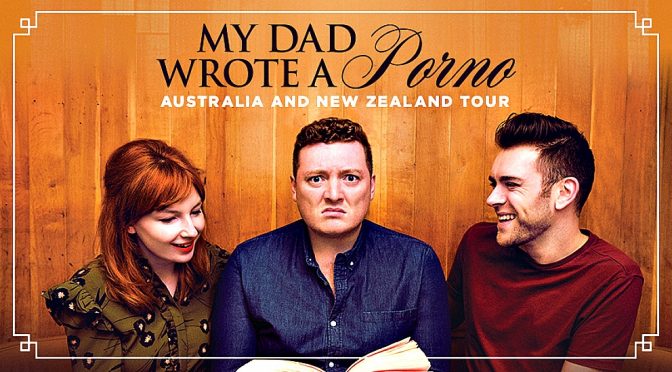 From the team who brought you the comedy podcast with currently over 70 million downloads, comes their live show.

The live show has just finished its New Zealand and Australia tour but has previously toured around the UK and Ireland and will soon travel to LA and New York. The Sydney Opera House had 2 sold out nights in the Concert Hall.

The entire building was awash with a lively, upbeat crowd of all ages – a true testament to the scope of the podcast’s audience. Prior to the show, a playlist of pop songs surrounding sexual themes played while everyone sang and danced along. From Madonna’s ‘Like a Virgin’ to Salt-N-Pepa’s ‘Let’s Talk About Sex.’

There is plenty of audience participation throughout. Some people dress up as characters, scenes, or ridiculous objects mentioned in the show. One audience member reads as one of the characters in a Welsh accent while two other audience members re-enact a scene to prove how impossible and ridiculous Rocky’s descriptions, and by extension his writing is!

My favourite part of the night occurs in the second half of the show, where Alice jumps up to announce how ludicrous it is that Rocky does not know basic female anatomy – something she regularly points out in the podcast. Donning a white lab coat, Alice pulls up a powerpoint presentation in which she gets the audience to help label parts of the female genitalia.

The show is exactly like the podcast, hilariously fun with the addition of a large group to enjoy the show along with.