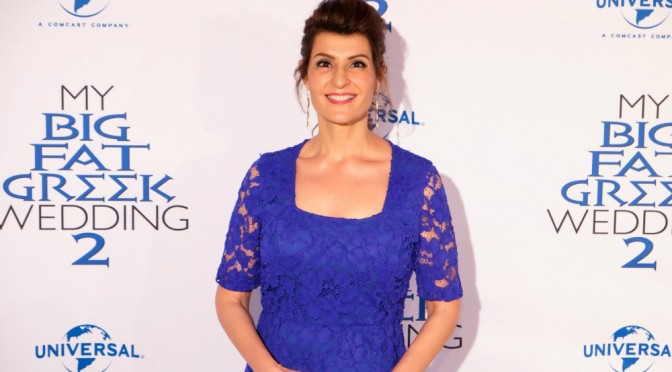 In 2002, a little known independent film with no major stars called My Big Fat Greek Wedding went on to become the highest-grossing romantic comedy of all time, ranking in over $300 million up against a mere $5 million budget and even earning an Oscar nomination for Best Original Screenplay.

Starring, created, written and co-produced by Nia Vardalos, the film was adapted from her one-woman play based on her own family and her experience marrying a non-Greek man.

A number of celebrities saw the play, including actress Rita Wilson, who is of Greek origin and her husband, actor and producer Tom Hanks whose production company made the film and who along with Wilson, served as producers to the movie.

Against all the odds, the film became an instant hit with its classic phrases such as “He’s not Greek” and “You don’t eat no meat? It’s all right, I’ll make lamb,” being embraced by popular culture.

In the original film, Nia Vardalos played Toula Portokalos who, much to the alarm of her parents, remained single longer than normal and ended up marrying Ian, a non-Greek.

In this first sequel we meet Toula and Ian’s daughter Paris, played by Elena Kampouris, who is in her final year of school and desperately wants to study at university away from her suffocating parents. At the same time Toula and Ian are having marital problems and are barely able to hold things together.

The plot thickens even further when Toula’s parents, Gus (Michael Constantine) and Maria (Lainie Kazan) discover that they were never legally married.

It’s been 14 years that we’ve had to wait for the release of My Big Fat Greek Wedding 2, but it was worth it. Normally I have low expectations on sequels, especially comedy sequels, but My Big Fat Greek Wedding 2 lived up to its hype and was almost as good as the original. It was smart and sassy, and tapped into the same aspects that made the first film so memorable.

In just over a week since it’s opening, My Big Fat Greek Wedding 2 has grossed nearly $30 million, narrowly coming second to Batman v Superman: Dawn of Justice which topped this week’s box office at $170 million.

Australian Greek celebrities in attendance at the Melbourne premiere included Nick Giannopoulos, George Kapiniaris and Effie who hosted the premiere.

When asked by The Sydney Arts Guide on the red carpet if there will be another sequel, producer Gary Goetzman said, “Audiences keep asking when the next one is coming and if Nia can be inspired to do it all again like she did for this one, that would be fabulous.” And Nia Vardalos? “I’m open to it, I really am.” Opa to that.

My Big Fat Greek Wedding 2 is now screening in cinemas.