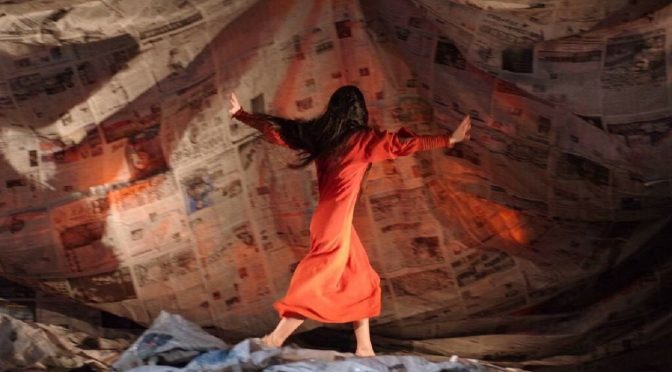 Tiziana Longo in MUTMotimaru’s MUT is the second work the company has brought to Sydney – last week I reviewed their TWILIGHT. Motimaru is a dance company founded in Tokyo by Motoya Kondo and Tiziana Longo, based in Berlin since 2010, who have taught and performed internationally. Their background is in performing arts, modern dance, martial arts, and Butoh.  Motimaru define dance as a way to experience deeper reality of our existence and are experimenting to create a new authentic dance method beyond any genre. This new work, MUT, is a solo work, choreographed and performed by Tiziana Longo.

Some would regard it as intense, dark, claustrophobic and possibly terrifying. According to the publicity about the work it is a response to the endless daily news reports of disaster – bombings, terrorist attacks, catastrophes etc in what seems to be almost information and emotional reaction overload. We are used to reading the newspaper and then discarding it – but if the newspaper came alive, what would it be like? The title MUT means Mother/courage/mutilated/mutual/multiracial and references the ancient Egyptian Mother Goddess – and/or perhaps Mother Earth?

It is a solo representing and including stories from many women of different countries and cultures that have come to be taken as icons and represent the contradicting faces of our society. MUT is also about information from the media, and how it can be manipulated and the ceaseless attempt to discover the underlying truth behind various stories. It is also a caustic comment on the oppression of women and the way women are treated as well as the way the female body is viewed and un/covered.

Hidemi Nishida’s set – of newspaper pages and sticky tape – claustrophobically dominates the space .Some of it is cloudlike and gently breathing up above and there are two large piles of newspaper (at times the sticky tape used to keep the pages together shines like plastic) on the floor when we, the audience, enter.

Drip, drip , rustle rustle …. Hoshiko Yamane’s soundscape is relentless and driven, silences punctuated by throbbing, pulsating music and it also includes voice overs, clock chimes telephone rings.
Longo ,when she eventually emerges as the soul of the newspaper, is dressed all in black – a heavily veiled burqua with a wonderful rose shaped hat over it and white face makeup.(Costume by Jean Beissel). It is rather ominous and threatening, rather like a chilling Victorian ghost (think The Woman in Black). Or is she all oppressed women? or a grief figure? Or a chrysalis to undergo more transformation?

Moments of stillness and silence are contrasted with fragile, slow movements , despairing walks, or, at other times, frantic runs and attacking of the surface of the set. Long straight arms are menacingly pointed at the audience, and at other times, there is a switch and polite interaction with the audience. At one point her black gloves are removed to reveal red ones and a dramatic fist is challengingly raised.

Eventually Longo takes the burqua off . We first glimpse the red skirt but she finally uncovers an elegant red dress with long sleeves. (The Scarlet Woman? Or red for blood and sacrifice?) and in one section Longo pulls and stretches her hair as if painting with it. At one point Longo jolts as if stabbed in the abdomen and there is a segment using symbolic red string.

A scurrying, and Longo wraps herself in the second large pile of paper which is ultimately removed to reveal Longo almost nude but covered in swirling curls of hair stuck to her in patterns like veins on the body. Here the choreography becomes angular and almost robotic. The dripping sound returns, Longo huddles back in the paper covering and then furiously removes the attached hair, ripping it off as if the strands were spiderwebs .

An intense thought provoking contemplation on the position of women in society human rights and the constant bombardment of news in an analysis of inner human nature.