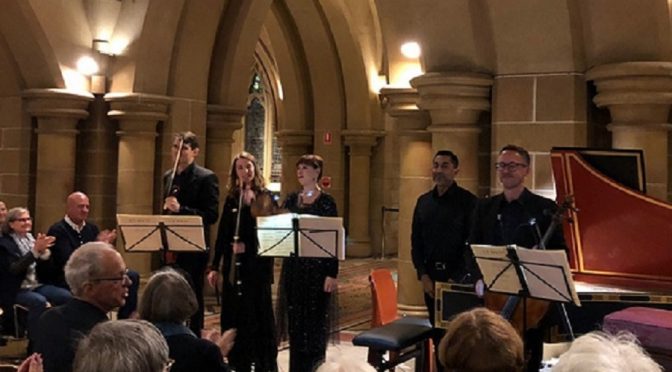 A reading by Neal Peres Da Costa as well as continued explanations, commentary and analysis by Madeleine Easton all vividly transported us back to the environment and incident surrounding the creation of this complex yet beautiful canonic creations presented to King Frederick of Prussia.

As explained through Neal’s reading of an historic account, JS Bach wrote the contents of this ‘Offering’ in the months following a meeting with the King of Prussia in May of 1747. The musical
King asked Bach to improvise on a supplied melody, especially challenging him to improvise canons up to a near impossible 6 parts.

Declining the challenge to improvise a 6-part canon, Bach went away to write a set of canons including one in six parts and a trio sonata inspired by the king’s theme. This was an elaborate, gifted and technically elevated response to the King’s musical requests concerning a theme maybe penned by King Frederick but perhaps CPE Bach, employed at the court at the time.

As explained clearly by Madeleine Easton, Bach’s ‘puzzle’ canons result in fine sonic results, but the genius of their creation and notation require the performers to manipulate the challenges and puzzles destined originally for the King prior to performance. The ‘offering’ contains Bach’s perhaps tongue in cheek notation tricks plus form and instrumentation choices in order to make the lines of Bach’s genius work.

And decipher Bach’s musical riddles for the musically ambitious King, the Bach Akademie did earnestly and with a musician’s admiration for the skill needed to create such treasures in disguise.
The group demonstrated their worth on our local scene as educators, musicologists and performers when realising these puzzle canons in the context of the complete offering Bach bombarded King Frederick and instrumentalists with in 1747.

Clearly introduced by Madeleine Easton, the playing of each canon was further enriched for us. In this way the puzzling nature of finding starting points for voices or arranging parts to be played in clefs various or flipped upside down and back to front was nicely summarised before we heard the end results.

The combination and various choices employed for use of violins, cello, flute and harpsichord was  across the set of ten canons. The instruments blended well, and the polyphony was attacked boldly with strong statements of the ‘king’s theme’. Bach’s clever harmonies spoke well and his range of colours, contours and characters in thematic statements  as well as episodes were nicely exploited by such exponents of Bach performance as the assembled musicians at this event.

Neal Peres Da Costa gave an excellent harpsichord version of the opening 3-part Ricercar and the church sonata for flute, violin and continuo benefitted from fine colours and tone on the period flute from Mikalea Oberg.

Mikaela also gave an interesting introduction here regarding non-keyed flutes of the period, tonalities and performance to add to other discussions on history, canonic music and compositional techniques or tricks specific to this gift to a demanding musical King.

Bach Akademie Australia provided a fine concert of music by their target composer with some interesting discussion on Bach’s compositional talent and perhaps his humour when dealing with patrons.

In this formidable early music acoustic and local concert setting they delivered phenomenally wrought polyphonic music, leaving us with the omnipresent and amazingly developed ‘king’s theme’ playing on repeat in our heads. There was definite joy in our hearts from an instructive and joyous performance of an entire evening of JS Bach.

The next instalment of Bach by Bach Akademie Australia, an exciting new live and recorded music force  on Australia’s concert and academic scene, will be no doubt very enthusiastically anticipated by audiences.