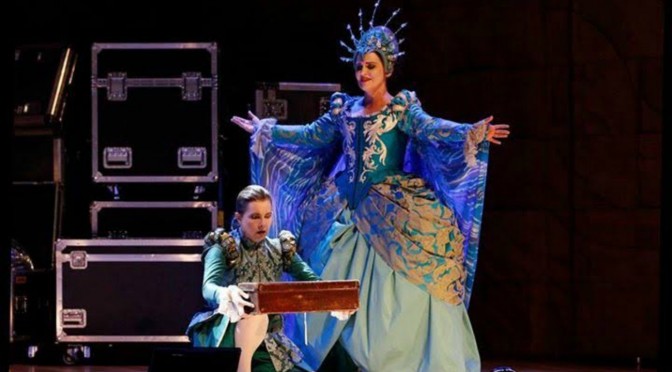 This newest local chamber opera bursts onto Australian stages with tremendous force and finesse. The talent and production prowess from both the Victorian Opera and Musica Viva collaborate well to bring it to life. VOYAGE TO THE MOON, as presented by Musica Viva, also allows masterclasses and discussion to surround the project as it enjoys exposure in six Australian cities.

VOYAGE TO THE MOON is a delectable journey which draws on the style of 18th century pasticcio opera. The process of borrowing music from various composers to help structure a newly developed story is continued in this modern Australia work.

Writer and director Michael Gow expands the popular tale of Orlando, often set in Baroque opera, who goes insane with jealous rage. In particular, the tale’s trip to the moon by Orlando’s friend Astolfo to find the sanity lost on earth inspires this operatic pastiche.

Such posting of borrowings to enhance various emotional reactions to a new thread sits very well with our modern multimedia sensibilities. The new recitatives and texts for arias are in our vernacular English to further localise the material and effect.

This is a well-directed dramatic performance in costume. Musical director Phoebe Briggs leads from the harpsichord with string players and oboist standing behind the action. Sinfonias chosen from the Baroque operatic and instrumental repertoire cleanly divide scenes and beautifully highlight the path of the narrative.

This touring production benefits from an evocatively minimalist set by Christina Smith, effectively lit by Matt Scott. Modern music stands, with instrument and band road cases create contours around the stage action . Smith’s costume design brings a fine array of colour and shape to the Angel Place space. They boldly swathe the three talented vocalists with a pleasing timelessness.

This pasticcio abounds with fabulous vocal delivery and the solid acting is supported by deft movement as the stage area is well used. In the absence of surtitles a small portion of the English text may get lost in the musical texture or rapid fire filigree. However, the feeling of each aria’s message is still communicated and dazzles with penetrating emotion or virtuosic display.

Emma Matthews presents the dual roles of Orlando as well as Selena, guardian of the moon’s human detritus.  Her pants-part acting as the insane Orlando and friend to Astolfo (Sally-Anne Russell) shows a male bravado which is identifiably contemporary at times.

Matthews excels as always in this period of music. Her defiant ‘As strong as an Army’, using the music from Hasse’s aria O placido il mare originally in the opera Siroe brings us to a new level of vocal variety and technical fireworks.

Sally-Anne Russell presents the role of Orlando’s friend Astolfo with confidence and colour. A highlight of the pasticcio creativity from Michael Gow and musicologist Alan Curtis is realised in Russell’s delivery of the recitative Can madness fall so sudden and the new abandonment aria Do not go and leave me weeping.

This aria, using the powerfully familiar music from Piangerò la sorte mia, performed usually by Cleopatra in Handel’s Giulio Cesare in Egitto, works excellently in its new guise. Its delivery with perfect  restraint in the hands of Sally-Anne Russell is an emotional and musical highlight of the opera.

The character of Magus the wise man and chariot pilot is finely drawn and sung with reliable diction by Jeremy Kleeman. He contributes well in ensemble moments, and also thrills with fine variation to phrasing and timbre in the aria Now may the storm be over, borrowed from Handel’s opera Sosarme.

This opera is a  dramatic and musical treat with a kaleidoscope of emotions on display. It has resulted from an innovative and capable exploration of early opera performance techniques and will not fail to entertain modern audiences. The national tour continues from Sydney to Brisbane, Canberra, Perth and concludes in Adelaide on March 12.