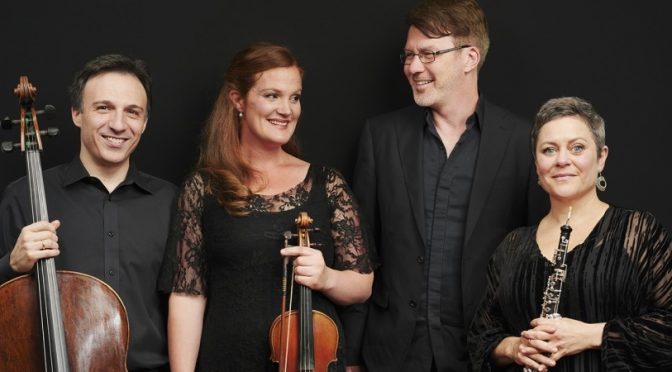 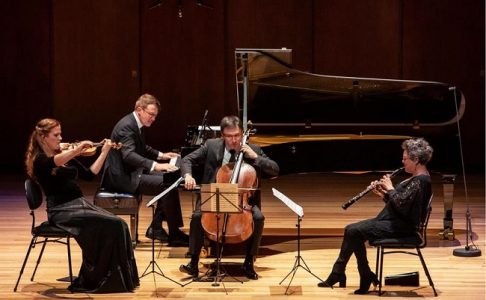 Above and featured image : The StreetonTrio and oboist Diana Doherty  played oboe quartets by Martinu and Lachlan Skipworth.

The Streeton Trio and oboist Diana Doherty have been on a national tour with Musica Viva throughout March 2021. Unable to attend the weekday Sydney concert, I was able to catch the streamed version. This option, a legacy of 2020 will now be standard for all Musica Viva concert events.

Musica Viva, now in its 76th year, has been dedicated to education, commissioning new local works and presenting quality concerts of a wide variety of chamber and other ensemble music.

This initial tour for 2021 champions the piano trio and its rare blend with oboe to produce the progressive timbre of oboe quartet without viola.

The concert began with the eclectic neoclassicism of Bohuslav Martinu. His Quartet for oboe, violin, cello and piano (1947) begins with intimate but angular gestures. The agile oboe layer over piano trio is clear and crisp in the hands of local legend Diana Doherty. 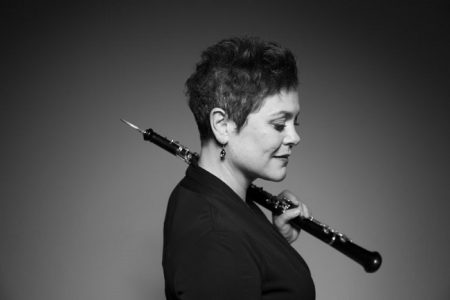 In this work, fragments are immediately imitated across the ensemble by Martinu. At all times as they are forged with dense development into the eventual huge concluding climaxes, the material is shared and responded to with precision and penetrating, subtly nuanced character across this ensemble.

Camera angles and shots during during and all works in the streamed concert version help us appreciate the work of all onstage. Filmed close-ups above the quartet and especially the oboe as it gelled with the trio was an illuminating view extending the live concert hall 180 degree experience.

There was fine blend in this work, and a pleasing momentum as players conveyed Martinu’s hectic series of fleeting references from Baroque thru to jazz sensibilities.

The engaging  range of colourings provided by the combination of timbres in this quartet was nicely introduced by this work. Downloadable Musica Viva concert guide notes were as always an illuminating concert companion for the viewer of the livestream version.

This work shows how Martinu communicated with distinct and unique flavour. His creative journey close to WW2 and the modern extension of chamber music with oboe was detailed nicely.

As we put the gorgeous tone colours of oboe quartet with piano to one side for a moment, the Vimeo concert stream continued dedicated to the familiar sound of piano trio.

The  piano trio work at this event was none other than the Piano Trio No 1 in D minor by Mendelssohn. Having heard the Streeton Trio’s sympathetic accompaniment and standard of interlocked lines with Diana Doherty in the opening dense Martinu work , we looked forward to fine ensemble playing in this well- known Mendelssohn trio. The StreetonTrio have also recorded Mendelssohn in the past to critical acclaim.

We were rewarded with very elegant playing  indeed as the famous trio unfolded. Phrasing, conversation, sharing of filigree and building of structures withing this interpretation was exquisite.

Tempo choice for the opening two movements was slightly under the momentum typically heard. Like Bach, Mendelssohn’s architecture does not collapse at a slightly slower tempo, and the group convinced us there was a treasure chest of beauty to be discovered at this speed also. A solid brooding expression resulted and the players displayed great control in the extended lyricism of the second movement,

After this interlude it was time for the Australian premiere part of Musica Viva’s concert. The livestream filming in front of and around the stage continued with the work commissioned written just for
this  ensemble. 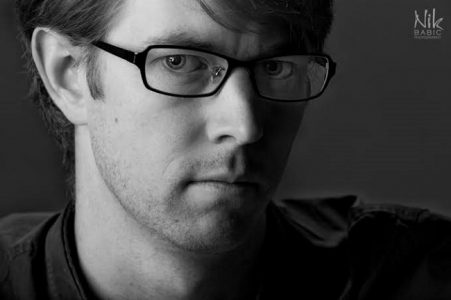 Lachlan Skipworth’s Oboe quartet, completed in pre-lockdown 2020, was an exciting addition to this concert. Commissioned by a family closely intertwined with Musica Viva, this beautifaul and dynamic soundscape with many momemts of rhythmic and emotional intensity shimmered with colour and feeling.

Especially rewarding in this work was Skipworth’s super-expansive melodies. The opening examples of these long lines on oboe were seamlessly delivered by Doherty. Contouring of such motives was always impressive in both the writing and performing.

Moments of dialogue between the quartet instruments  were a nice change of the intimacy level. Watching the video between composer and oboist also available online shed light on the link between the commissioning person and his music loving family being immortalised in the musical discussion.

This work was a perfect end to the first Musica Viva concert. Its clarity and stillness of environment  epitomised the power of Australian music, Australian performers and the transformative expressive potential of chamber music as brought to us live or online in 2021 and beyond.