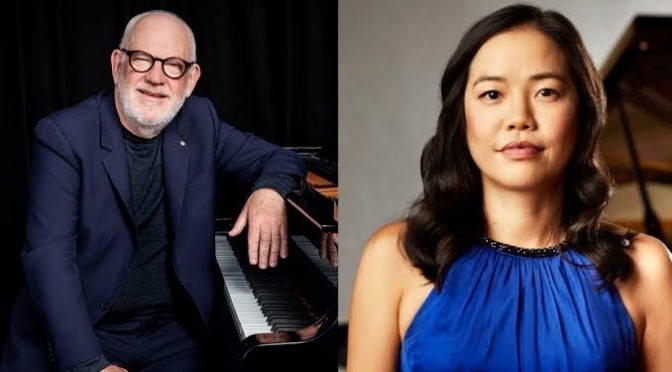 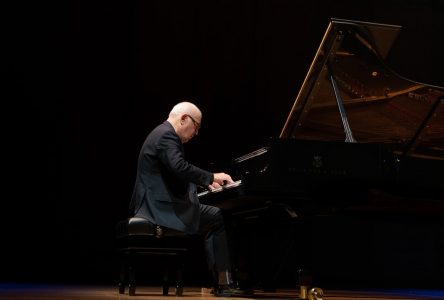 Recently Bach’s magnificent Goldberg Variations have been in the global spotlight. Pianist Lang Lang and French harpsichordist Jean Rondeau have released recordings of the challenging set and also have embarked on international tours playing the sprawling collection.

In a bold and rewarding concert twist, Lam was joined in this concert by jazz pianist and local legend Paul Grabowsky, whose improvisation based on the Aria in the second half was an exciting counterpoint to the complete Bach set presented in the first half in traditional form on the modern piano.

The enduring genius of Bach’s construction allows his music in whatever style to succeed in many guises and on various keyboard instruments. On the modern piano, it shines with assorted approaches to tempi, voicing, articulation and any capable realisation of his complex architecture.

In this concert, Andrea Lam supplied a comprehensive rendering of the challenge of shifting the Goldbergs from double manual harpsichord to piano. Her athletic arrangement of hand crossovers and part playing was a joy to watch.

Lam’s expression during performance of the variations, either during lyrical or fiendishly busy moments reached us from the subtle excellence of her modern piano performance with tasteful,even touch and pleasing treatment of the various textures.

As well as this dexterity, the restraint and control shown in the more expressive variations offered a tasteful lyricism and beauty of piano tone. This made the set feel like it was always intended for rejoicing on the piano.

This was a huge play from memory, with contrasts of character and swift movement between variations adding to the quality of storytelling and momentum. Framing the thirty busy and colourful variations were statements of the famous Aria which spoke in gentle, pure voice.

This voice for the opening Aria especially was a joy to be exposed to. It was tastefully nuanced with effective drops of volume that allowed no blurring of purity in the penetrating piano tone. The precision and shape shifting essential for the changing gestures in Bach’s typical sarabande movements was present here.

Highlighting the versatility of Bach’s creativity, the night progressed in the second half of this concert to the new keyboard and musical accent of Paul Grabowsky’s jazz improvisation, launched after his playing of Bach’s Goldberg Aria.

Grabowsky’s journey began with an airing of the Goldberg Aria with a new shade of intimacy for the familiar Aria yet again than heard in Andrea Lam’s rendering.  As Bach’s variations in this jazz legend’s hands careered off in many directions leaving the melody of the aria untouched, so too did his eclectic, extended exploration.

We were treated in this concert’s second half to large scale live improvisation. Such fluid and extended extemporisation is often not included now in concert programmes, despite centuries of it appearing in several periods of music history.

Grabowsky’s kaleidoscopic commentary continued for forty minutes breathtakingly without pause. As in the Goldberg variations, there were moments of rest from busy keyboard patterning. These contrasts used magical stylistic shifts through global jazz resources, including even the stillness of trance styles and morphing through various energies from many other musical feels.

The veiled, transposed Aria theme when woven back in at the final stages of the live jazz variation was beautifully voiced and expertly delivered. It gilded the end of this worthwhile jazz versus Baroque experiment.

This was a successful experiment in  which both genres survived well. Entertainment also prevailed in this innovative programming structure, as the Musica Viva motto of ‘Music to Inspire’ was on brilliant display.

The dexterity and substantial musicality of both Andrea Lam and Paul Grabowsky successfully blended keyboard playing from worlds apart into the one eighty minute space. This transformation of typical concert programming and tour with artists from contrasting musical outlooks was a master stroke from Musica Viva.

This concept, accompanied by the usual Musica Viva tour interviews, workshops as well as Q and A sessions breathed fresh life into an established work. This tour varied the Goldberg Variations further and inspired the audience with a new musical broadmindedness and juxtaposition of styles.