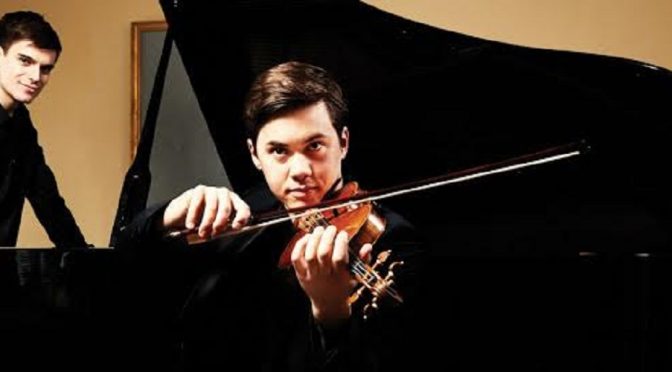 Musica Viva’s International Concert Season for 2017 continued this past week with a stunning concert by Benjamin Beilman and Andrew Tyson, a violin and piano duo from the United States. This weekend concert in Sydney continued the tour which had already taken the pair to Perth, Coffs Harbour, Armidale, Adelaide, Newcastle as well as  Sydney  earlier in the week.

The chosen programme was a solid vehicle with which to demonstrate Beilman and Tyson as individual virtuosi as well as an exciting duo. The performances of interesting and evocative works were always intensely emotional and absorbed in their mindset as well as their physical execution.

Attention to changing musical detail across styles from 1787 through to 2016 was always keen and works were articulated with an appropriate flair fitting their four distinct time periods. Intricacies of conversation from this skilled pair showcased the blend of their two instruments when used by various composers as an expressive chamber music force.

The dramatic performances began with late Mozart, namely his Sonata No 35 in A major K526 (‘for Piano and Violin’) from 1787. Mozart, if emerging from a time machine to Angel Place, would have been re-energised to discover the depth of conversation and instrumental blend occurring.

Andrew Tyson’s richly nuanced rendering of the music on modern piano would also have excited the composer, as it did the concert audience. The work’s opening was a tasteful treat in this regard with effective dynamic variation and scintillating filigree. The Andante movement with beautiful singing tone on Beilman’s violin was exquisitely realised. The duo once again produced many colours from their extensive palettes.

Beilman and Tyson exhibited amazing control as instrumental effects bristled with sentiment and the depiction of predicament in Janáček’s Violin Sonata (1922). From Beilman’s arresting initial string outburst onwards, hope, pride, fear, anger and the inevitability of invasion were all believable extra-musical elements resulting from the duo’s committed playing of the score.

The performance of this work was an intellectual and emotional powerhouse. Its capably played dynamic extremes and bold presentation of the expressive shapes in both accompaniment and thematic declamations made it a concert highlight.

Following interval we heard a world premiere work by Sydney composer Jane Stanley. As usual, the benefit of attending a Musica Viva concert included hearing a new or recent Australian work. Cerulean Orbits (2016) heard in this concert was written for this duo and this tour. It had enjoyed much collaboration with the target performers during the creative process.

The innovative new work, brings the individual timbres or energy centres of violin and piano into constantly shifting atmospheric closeness. Perhaps the work could be taken as a satisfying metaphor for the separate parts with constantly varying hues that make up any duo or chamber ensemble.

This work’s concept and architecture was explained by Andrew Tyson and became a spellbindingly clear soundscape in the hands of its first performers.

To conclude the concert, the lush and sweeping Sonata No 1in D minor Op 75 brought us back to the nineteenth century, and to the gifted chamber music composer Saint-Saëns. This composer’s techniques and more colourful conversations from playing of Beilman and Tyson magnified the music beyond the scope of the two musicians on stage.

The work’s demands of contrast were well met, and the programme finished with amazing displays of string and keyboard bravura. The audience reaction clearly showed many hoped for future tours from the pair.

Beilman and Tyson’s tour with Musica Viva continues to Brisbane, Canberra and Melbourne, where it concludes on October 25.