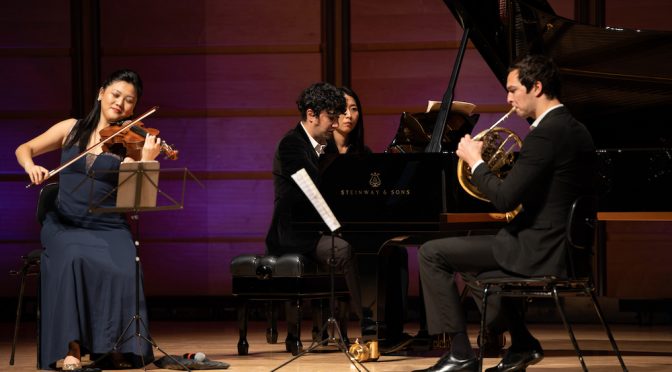 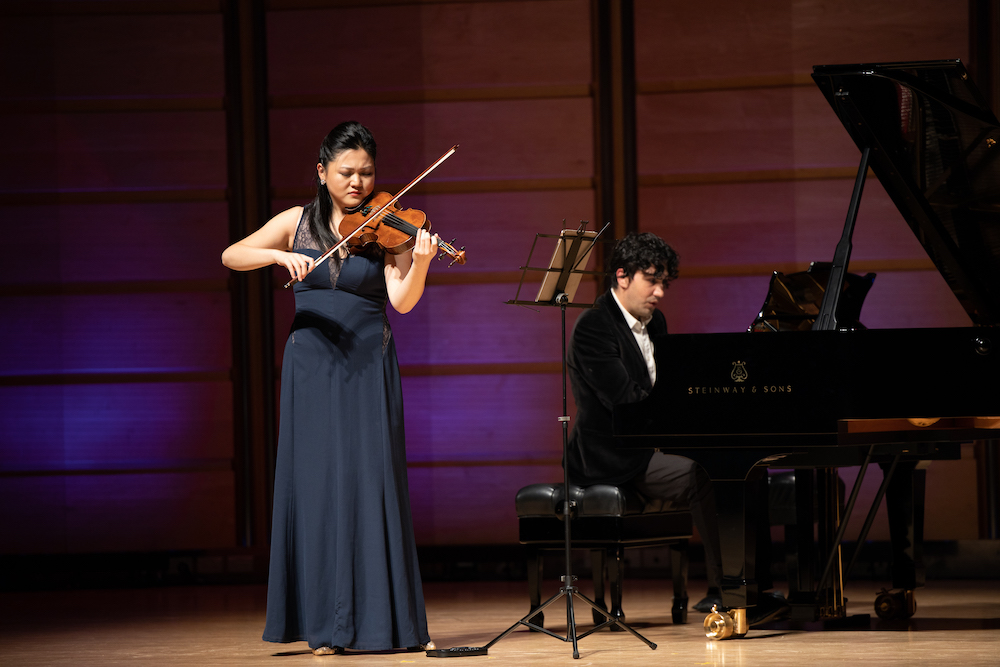 It was a rainy, cold Saturday afternoon in Sydney on June 19th, with a local Covid cluster once again threatening to destroy the school holidays. The throng of suitably be-masked audience members eagerly milled into the City Recital Hall for the Musica Viva chamber concert by soloists Emily Sun, Amir Farid and Nicolas Fleury, which promised to be excellent. The average age of the audience was quite high, as is usual for classical matinee performances in Sydney, and I admired their bravery until it occurred to me that, being over 50, most of them had already probably been vaccinated. I admit to being a little jealous. Meanwhile, my friend had fallen prey to the casual cruelties of finding parking in the CBD in the rain, so I left her ticket at the box office and kept an eye out for her arrival, as I took my seat.

This concert was always going to have a special meaning for me. The final item on the program, the famous 1865 Op. 40 Trio by Brahms, is one of the few piano trios in The Canon to be rebadged as a ‘Horn Trio’, and it has a fond place in my heart. It was the piece I performed (as pianist) for my HSC Music Extension exam twenty years ago with my teachers, one on violin and one on clarinet standing in for the Waldhorn, or natural horn; and then later again in my undergraduate years with my fellow students on violin and viola, in the continued absence of any good hornists. (Advice to young musicians: learn the French horn. If you’re any good you’ll be in very, very hot demand.) I had idly fished the sheet music out of a dusty garage sale box in the late 90s and slowly, inexorably, I fell for this work’s charms: its passionate, lush harmonies, vivacious hunting motifs, pianistic and synchronistic challenges and hearty German Romantic flavour. I have listened over the years to many different recordings, performed by musicians far more capable than I have ever been: the Perlman/Barenboim/Celvenger video on YouTube is a particular standout. This, then, was to be the real treat of the afternoon: a live performance of the Horn Trio by a supergroup of young international soloists, complete with (spoiler alert) an actual horn.

First, however, we had Mozart’s Horn Quintet K407 (1782), as arranged by Ernst Naumann (1910). Composer Gordon Kerry’s insightful program notes point out how Naumann may have been thinking of his friend Brahms’ great Trio when arranging the Mozart work, so this is a natural programming choice. Kerry also tells us about Mozart’s much-abused friend, the horn virtuoso Joseph Leutgeb, for whom the genius wrote his great works for horn, including the Concerto No. 4 of “I once had a whim and I had to obey it/ To buy a French horn in a second-hand shop” fame. While Mozart was a pianist and violist who liked to give the viola a special role, as he did in this Quintet, there is no viola in Naumann’s arrangement and the piano is relegated to an accompaniment role. The charmingly tousle-haired, musically sensitive pianistic powerhouse Amir Farid was therefore a little underused, and the horn and violin are the stars. Emily Sun’s totally assured, expressive playing on her beautiful 1760 Nicolo Gagliano violin and even the splendour of her dress seemed to mark her out as the trio’s leader, though perhaps this is mostly related to the greater degree of physical movement that is naturally permitted by the violin, in comparison with the horn. Fleury certainly did not disappoint however, with an outstandingly mellifluous rich tone, perfect precision of intonation and virtuosic facility across the registers.

One of the best things about chamber music is watching the eyes, and my seat allowed me to indulge. I was fascinated by the interplay between the performers and by the expressions on their (all strikingly attractive, it has to be said) faces and in their body language. In the Mozart, they were all ease, joyousness and vivacity. The brisk but never rushed tempo of the first movement gave way to a lovely lyrical second movement with beautiful messa di voce effects on violin in the A section and a more dramatic, but short B section. In the third movement some of the Brahms Trio’s ‘hunting’ flavour was foreshadowed, with brilliant scalic runs, trills and arpeggios. Finally the piano got a brief moment to shine in the coda, but thankfully Farid never seemed to have the sense of arrogant ego that mars the performances of many a piano soloist, especially in a chamber context. The three virtuosi were beautifully in sync with each other, not just in terms of timing but also in mood, as evident in their faces and bodies.

Fleury then took a well-earned break while Gordon Kerry himself came to the stage, thanking everyone for “braving the weather and plague” and noting the contribution of the next piece’s benefactor, Julian Burnside AO QC, who is a great philanthropic supporter of the arts “simply out of the belief that the arts are good for us and we need more of them.” (Having missed out on his Greens senate bid last year, could he please just lobby our government…?) Kerry explained that he composed the upcoming little Sonata for violin and piano to play to each performer’s strengths. It is a premiere run of this work, which is always exciting.

The Sonata began with dramatic high harmonics on violin and shimmering chords on the piano. The stop-start, stop-start phrasing built suspense in a painterly, impressionistic style, with the pulse often obscured through time signature and tempo changes. Again, I felt that Sun on violin was really the star here, though Farid had more to do than in the Mozart. The intense focus on the faces of the performers reflected the difficulty of this made-to-measure work, which required exceptional technique and attention to each other’s cues, and explored various different violin techniques such as fluttering cross-string sul tasto and aggressive spiccato. Gradually descending in tessitura in both instruments, some more lyrical and declamatory melodic material brought us to the close. Kerry’s new little baby has been born, and it is demanding both of the performers and the audience, but also very rewarding.

Now for the one we’d all been waiting for: the Brahms. Sun stood up and took the mic, again seeming to take the lead. She explained how this concert had “nearly not happened” as they had all been languishing in lockdown in Melbourne, forced to spend countless hours on FaceTime demonstrating tempos and experimenting out-of-sync with each other– surely an incredibly frustrating experience, when chamber music requires the most attention to synchronisation of all the genres. Farid even had to cope with only a digital piano at home! Eventually however they made it to real rehearsals in Sydney and this gloriousness was born.

I say gloriousness, because the Brahms lived up to all my very high expectations. I wept slightly at the opening chords. The three young stars were much more daring with rubato and with tempo in general than I ever was, having complete mastery of their instruments. Finally Farid really came into his own: the piano part is quite challenging and the three instruments have equal roles in this work, operating as a tight team. Here, their faces and bodies showed passionate intensity, marked by moments of great joy, all of which was perfectly matched by their musical expression. The Andante’s sweeping pastoral vistas gave way to the Scherzo’s intense and joyful hunt, and the Adagio Mesto’s beautiful funeral dirge, written in memory of Brahms’ mother, tore at the heartstrings.

My only quibble was that for all the Artistic Director Paul Kildea’s notes in the program about Brahms’ Luddite scoring for the natural horn, Fleury played this on the modern valved horn, despite being trained in both. It is certainly a greater challenge on the Waldhorn, but surely Fleury would be up to it? A recent Limelight interview with Fleury has him stating “I will be performing both pieces on the modern instrument. The key to an accurate interpretation is to always remember what the composer intended. So, despite using my modern instrument, I will use my left hand (the valves system) far less than I usually would in music like Mahler or Debussy for example.” This seems to me as if Fleury is hedging his bets. And with the ideological developments of the past few decades, do we even need ‘accuracy’ and ‘fidelity to the composer’s intentions’ in interpretations any more? On the other hand, I like the idea of using the Waldhorn, if only because the closer a performance gets to the limits of the performer’s abilities, the more exciting it is for the audience.

At any rate, Fleury’s performance is extraordinarily beautiful, as are Sun’s and Farid’s. Brahms’ exuberant Finale is taken at breathtaking speed and seems to positively crackle with excitement. This is a performance well worth catching: the Finale rounds out a wonderful, if slightly short, concert. Though she never made it to the seat next to mine, fortunately my friend did catch most of the concert and thoroughly enjoyed it too. In fact, it was so much fun that I think I will watch tonight’s livestreamed performance as well. In the meantime, I’m off to go and brush up on that Finale at the piano.