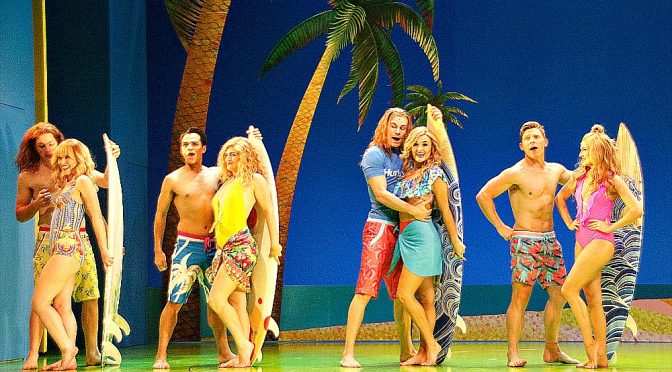 After much anticipation, MURIEL’S WEDDING THE MUSICAL is finally arriving! A joint co-production by the Sydney Theatre Company and Global Creatures, the show is opening tonight at the Roslyn Packer Theatre.

A stage musical adaptation, brought to the present day by writer PJ Hogan, the show is being directed by Simon Phillips and features original music by Kate Miller-Heidke and Keir Nuttall, along with the original beloved Abba numbers. The show is exclusively playing Sydney.

The Sydney Theatre Company held a Media Call at the Roslyn Packer Theatre on Thursday morning. The cast exuberantly performed a few scenes from the show for the cameramen and photographers. (A selection of Guide photographer Ben Apfelbaum’s photos accompany this article).

The show’s main players were on hand and were happy to have a chat. The ever affable, and urbane Director Simon Phillips, for some time now seen as Australia’s go to man for big musicals, was looking forward to opening night. He spoke about how everyone had risen to the challenge of bringing a new work to the stage. He is delighted with the hard work his cast has put in, and believes that the combining of young performers just starting out with actors of many years experience has worked out very well.

The film  Muriel’s Wedding was PJ Hogan’s big break into the film industry. Hogan is now considered one of Australia’s  most prominent and internationally acclaimed writers and directors. He spoke of how there was no way he could have foretold the success that would come from telling his sister’s story.

Paul is ever thankful of his sister’s good nature in allowing him to make a story around her, and that over twenty years on they still have a good relationship. Things were a little more difficult  in regards to his relationship with his father after Bill Hunter’s more than biting portrayal though when the film became an overwhelming success his father’s animosity died down and he became just another proud Dad!

After opening night, Paul’s work on Muriel will have be done and he said that he will then be returning to working on his next film project, a screen adaptation of a novel, with his writer/director wife, Jocelyn Moorehouse.

I spoke to husband and wife composers Kate Miller-Heidke and Keir Nuttall who talked about how working on the musical had been by and far away the biggest challenge of their careers. They have never scored a musical before, and coming up with the right songs to match the story’s tone and milieu had been difficult. It was pleasing to hear them say that they felt the Muriel experience had been a very positive one, and that they would be keen to undertake more scores for musicals in the future.

The stage is set for the grand opening. Showtime is tonight at 7.30pm with Red Carpet Arrivals from 6pm. It promises to be a great show, and I am sure there will be one enormous after party to celebrate a  new, brassy, bold Australian musical.

Pics at the Media Call by Ben Apfelbaum ©