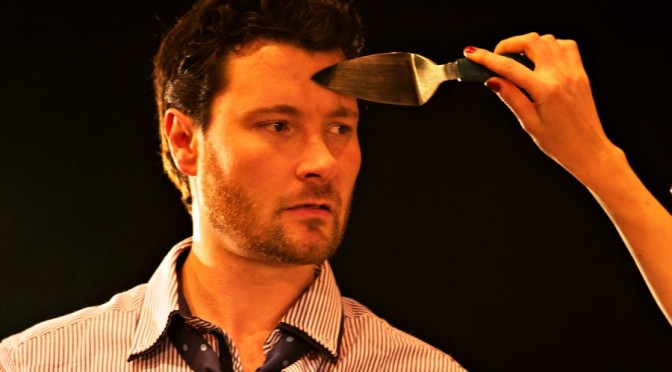 David Gieselmann’s play, translated by David Tushingham and presented by Pantsguys, is absurdist black comedy at its best. It produces many laughs, numerous plot twists, some shocks and highlights some very unpleasant aspects of human behaviour.

A bored young couple, Sarah (Claire Lovering) and chaos researcher Ralf (Tim Reuben), invite Edith (Paige Gardiner) who works with Sarah and her architect husband Bastian (Garth Holcombe) for dinner and an evening of mind games and manipulation. They fail to provide dinner and order take away pizzas in one of the plays many clever comic moments.

Things take a dark turn when Sarah & Ralph claim they have killed their co-worker Mr Kolpert and put his body in a large trunk which features on the side of the stage. Did they really murder Mr Kolpert, or are they just carrying out a grim wind-up of their guests, especially Bastian, who comes to truly believe they are the callous murderers despite their urbane and witty chat?

It is this uncertainty about Mr Kolpert which focuses the black humour and much of the tension of the play. There is a surprising final moment of the play which comes out of nowhere yet fits perfectly.

James Dalton’s strong direction moves the 80 minute play along with increasing emotional intensity gripping the audience’s attention as we seek to know the truth about Mr Kolpert and the characters themselves.

Garth Holcombe’s obsessive Bastian Mole has his anger levels set to extreme and his wild eyes are truly fanatical.

Claire Lovering as Sarah seems almost pleasant and ordinary at the start but has a much darker side. Tim Reuben plays her partner, the slightly dreamy researcher Ralf. However by the end of the play they become alarmingly sinister because of their apparent ordinariness.

Paige Gardiner’s Edith is extremely unpredictable as she goes from slightly neurotic to almost psychopathic as the play descends further to its climax.

Edan Lacey is hilarious as the pizza man who finds he has stepped into social mayhem.

Tom Christophen has a minor but effective part.

The play is highly entertaining yet also highlights what Gieselmann believes is a contemporary issue with urban boredom and the lack of real emotions that this brings which leads people to extremes of behaviour in the pursuit of some sense of fulfillment.

MR KOLPERT is playing at ATYP Studio 1 The Wharf till August 16th.