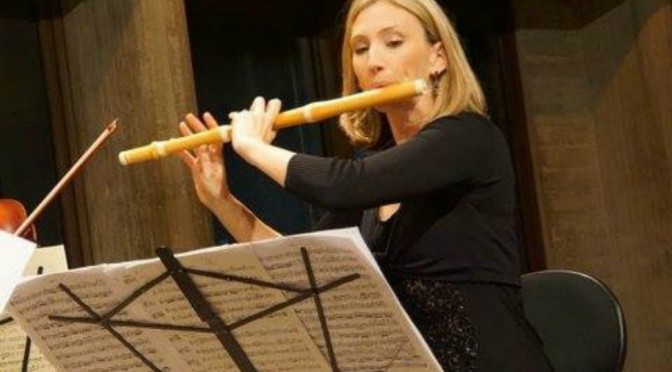 In this second concert of the AHE’s 2015 series we are exposed to the chamber music formats of string trio and flute quartet. These two genres alternate throughout the programme. We are presented eighteenth-century fare from well-known composers as well as compositions by Mozart’s lesser known flute-virtuoso contemporaries.

The Haydn String Trio in G major, Opus 53 No 1 opens the concert. It is played with great balance and exchange between the instruments. This arrangement of his Piano Sonata Hob XVI:40 contains characteristic Haydn filigree now heard on violin, which is well characterised and always interestingly delivered by this ensemble.

The concert is titled “Mozart’s Flute”, however the majority of concert time devoted to flute or string trio works is not music by Mozart. This offering features much more than the exquisite shapes in the single Mozart work which concludes the concert, the Flute Quartet K285b. Works by flautist-composers Graf and Wendling also make for compelling and rewarding listening, broadening our exposure to flute and chamber music of the period.

Regular core member of the Haydn Ensemble flautist Melissa Farrow’s period performance and instrument crowns the texture with gentle cantabile in Graf’s G major Flute Quartet, Op 5 No 5. There is spitfire articulation and successful rapid runs to be heard in Wendling’s Gmajor Flute Quartet Op 10, No 1. This is exciting virtuoso flute playing by Farrow, with fine support from the AHE string contingent.

The intimate timbre of the string trio is well celebrated throughout in focused and well-balanced performances. From the Haydn arrangement through unique expression in Boccherini’s A major String Trio,Op 47 No 1 to Beethoven’s sprawling Serenade in D major for String Trio, Op. 8 we are introduced to the diversity explored by the great composers through this genre.

A definite highlight and master stroke in programming is the Beethoven trio. It shows a master at work pushing the limits of the possibilities and sonorities for this ensemble. The AHE string players, namely Skye McIntosh on violin, Anthea Cottee on cello and James Eccles on viola applied themselves well to the task of communicating the many moods of the trio’s seven movements.

From expressive moments of pizzicato punctuation to the cheeky pauses of later movements and the violin part’s overall challenging decoration, it is a compelling performance indeed. Beethoven’s work is a worthwhile inclusion to showcase both Mozart’s progressive young contemporary and the interpretative talents within this progressive group of period instrumentalists.

MOZART’S FLUTE can still be heard at Berry on Friday May 1 and at Burradoo on Saturday May 2.The next AHE concert continues the ensemble’s presentation of Beethoven piano concerti and eighteenth century orchestral music in chamber arrangement from previous years.

The programme for this June concert includes the Beethoven piano Concerto No 3 and Mozart’s Symphony No 40. Neale Peres da Costa is the soloist in what promises to be another enlightened and elegant programme of chamber music gems.