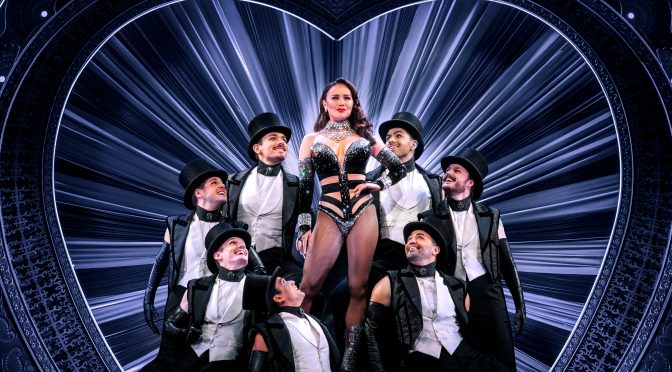 There are many, many shows that finish with the hero/heroine dying and the audience is caught up in a huge groundswell of emotion. Shakespeare knew how to reach audiences when he had Romeo first and then Juliet die, the result of an irrational and deadly feud between two leading families in Verona.

At the end of  two hours plus of dynamic theatre, this show’s highest point, its crescendo, is reached, with Christian cradling Satine in his arms. Consumption had just claimed another victim. The cast come on stage to give a rousing finale, and another of Sydney’s major opening nights has come to a close.

What is it about the big musicals that draws so many people to them? A lot of people save up so that they can just see the big shows each year.  Going to ‘ordinary’ theatre is not even on their radar.

My theory, in brief.  It is about the enormous whoosh of energy, of ‘electricity’, that is generated on stage and bounces off the stage and into the hearts of everyone in the audience. It’s what makes us feel as if our weary lives had just been recharged as we head out of the theatre and into the night.

MOULIN ROUGE! THE MUSICAL is a great package; the energy is everywhere. It’s in the outstanding performers, in the dancing, in the broad selection of music, in the awesome lighting, in the fabulous costumes, in the vast array of sets. I could go on…It’s the magic  of the big shows. And after each night the energy is bottled and then unleashed again for the next audience.

Baz Luhrmann’s film has been brilliantly  for the stage by John Logan with great direction by Alex Timers.  Music supervision, orchestrations and arrangements were by  Justin Levine, choreography was by Emmy nominee and Tony Award winner Sonya Tayeh, costumes were designed by Olivier and Tony Award winner Catherine Zuber,scenic design by  Derek Mclane, and a superb lighting design byJustin Townsend

There was plenty of chemistry between the lead couple,  Alinta Chidzey as the sparkling diamond Satine and Des Flanagan as bohemian dreamer Christian.

Andrew Cook was superb as the Duke, the villain of the piece.

Veteran thespian Simon Burke gave a suitably big performance as club owner and  impresario Harold Zigler. Burke was just great and much of the show pivoted around him.

The club’s famed entertainers known as the ‘Lady M’s’ were played by a superb Samantha Dodemaide as Nini, Olivia Vásquez as Arabia, Ruva as La Chocolat, and Christopher J Scalzo as Babydoll.

The principals were supported by a talented ensemble of fifteen performers.

Musical Director Luke Hunter led a superb orchestra  who could not be seen as they were in the orchestra  pit beneath the stage. The show’s soundtrack celebrated over 160 years of music from Offenbach to Elton John to Lady Gaga. Featuring over 70
songs, the production included many of the iconic hits from the movie as well as new additions from Adele, Katy
Perry, Sia, Beyonce, Rihanna and more.

Highlights of this spectacular show included the huge Moulin Rouge neon sign that greeted audiences when we walked into the theatre, a large elephant, a beautiful windmill and 12 large scale chandeliers which bedecked the stage. Over two hundred speakers amplified the music.

Running time is 2 hours and 35 minutes with one interval.

MOULIN. ROUGE ! THE MUSICAL is currently playing the Capitol Theatre with bookings well into the future.