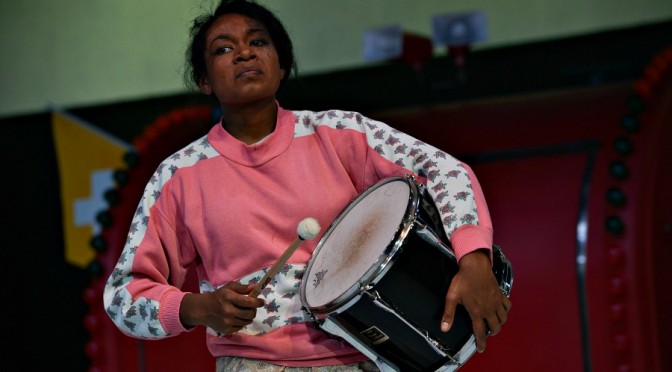 Tennessee Williams described Bertolt Brecht’s MOTHER COURAGE AND HER CHILDREN as one of the great dramas  of the 20th century. A strong recommendation, considering he wrote a  few of them himself.

The great German  playwright wrote the piece in 1939 in direct response to the rise of Nazism in Germany. Brecht set the play in  a different time period, the time of the Thirty Years’ War between 1618-1648.

The story follows the fortunes of Mother Courage (Robyn Nevin), a wily canteen woman with the Swedish Army who is determined to make her living from the war. Over the course of the play, she loses all three of her children, Swiss Cheese (Tom Conroy), Eilif (Richard Pyros), and Kattrin (Emele Ugavule), to the same war from which she sought to profit from.

Eamon  Flack’s current revival at Belvoir, with a fresh translation by Michael Gow and a new soundscape by Stefan Gregory, serves this masterful, haunting anti-war work well. It of-course helps when he has Robyn  Nevin, one of our finest actresses, playing the lead role.

Our attention never flags with Nevin’s portrayal of an archetypal battler. Mother Courage is not at all likable but God she has true grit. Nevin gets to display her full range including  plenty of song and dance. The songs feature Brecht’s  coarse, streetwise lyrics.

In a strong ensemble cast, other stand-out performances were delivered by Paula Arundell as the ubiquitous prostitute Yvette, and Emele Ugavule who gave a very touching performance as  Kattrin.  The fateful scene when she raises the alarm by banging hard on a drum is heartbreaking.

Robert Cousins’ design works well. The famous cart is painted bright red etched with multi-coloured lights.  Back stage right is laid out like a stage dressing room. As the audience is walking into the theatre we see actors across to the ‘dressing room’, sit down and and mingle.

The staging is deliberate and Brecht to a tee. An essential part of his stagecraft was that he wanted to distance the audience from the action- to remind them that they were watching a piece of theatre- and to drive audiences to a more lasting, intellectual response.

Recommended, MOTHER COURAGE AND HER CHILDREN is playing upstairs at Belvoir Street theatre, 25 Belvoir Street, Surry Hills until the 26th July. Performance times Tuesdays at 6.30pm, Wednesdays to Fridays at 8pm, Saturdays at 2pm and 8pm and Sundays at 5pm. There will be an unwaged performance at 2pm on Thursday 2nd July and a captioned performance  at 2pm on Saturday 11th July. Bookings 96993444 or belvoir.com.au.