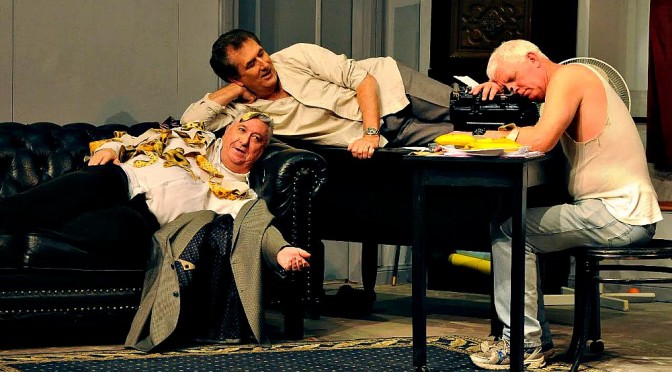 Everyone knows about the enormous success of the movie Gone with the Wind. What few people know is that not long into the shooting of the film the movie was in desperate straits and it looked as if the film would be canned. It is this revealing piece of cinema history that forms the basis of Hutchinson’s wildly funny play, MOONLIGHT AND MAGNOLIAS.

It is 1939 in Hollywood and producer David O. Selznick has shut down production of Gone with the Wind. The screenplay just doesn’t work. What is Selznick going to do?! He summons screenwriter Ben Hecht and director Victor Fleming and gives them five days to rewrite the script.

Over the course of five chaotic days, the three men, assisted by Selznick’s assistant, Miss Poppenghul, survive on just bananas and peanuts,  to produce the film’s classic screenplay.  As Selznick and Fleming act out the script for Hecht, the phone rings off the hook with calls from various famous Hollywood characters and Selznick’s father-in-law.

Hutchinson’s play, having some basis in historical events,  was written in the style of a farce, but the characters also raise serious issues around class, race and the difficult position of Jewish executives in Hollywood.

All the characters are  well cast. Greg Kenyon as Selznick gives a fine portrayal of the director determined to get the screenplay written no matter the cost to himself or anyone around him. Amidst chaos and comedy he drives everyone to the brink of insanity.

Robert Mason brings emotion to his part as Ben Hecht, an established Jewish writer torn between the rampant anti-semitism and the glamour that  existed in Hollywood.

The continual flippant remarks between Fleming and Hecht that the movie will be a complete white elephant, adds much irony to the script.

Additional comic relief is provided by Rachel Miller as Miss Poppenghul, the ever efficient secretary who, like the other characters, disintegrates in front of our eyes as the deadline looms closer.

The director Jennifer Gilchrist ensures there is a balance between the verbal and physical comedy of the play and the more serious issues touched upon.

A detailed set by Jim Farrow brings the audience into the era of the play while still allowing plenty of space for the comic action. The atmosphere is heightened by the sound and a short photo presentation at the end.

For a fun filled, entertaining night out try and catch The Guild Theatre’s production of   MOONLIGHT AND MAGNOLIAS   now playing at the The Guild Theatre, 4 Walz Street  corner  87 Railway Street, Rockdale, NSW   until Saturday 5th September.