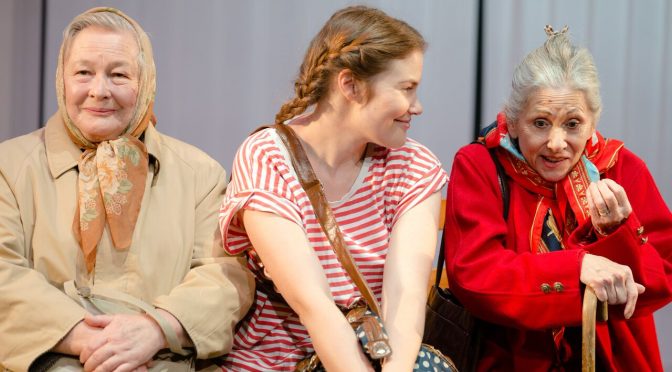 Ingeborg plays Ana, octogenarian Hungarian, World War II survivor. Recently widowed, she has relocated to another street in her suburb with her dog, Bella, a German Shepherd with a pinch of Pinscher.

Ana is the eyes of the street, the veritable neighbourhood watch, an imperious curmudgeon inquisitive of other people’s secrets, always ready to impart her vast well of wisdom and pool of opinion.

She takes under her wing a young woman who lives in the street, Catherine, a struggling actress sharing a house with aspiring writer, Ken.

Catherine is emotionally crippled by a past relationship and Ana appoints herself as Catherine’s emotional rescuer, whether Catherine wants rescuing or not.

Anne Wilson as Catherine, nicely navigates the jagged journey from emotional cripple to convalescence, while Julie Hudspeth and Christine Greenough are delightful in their various and distinctly variant roles as fellow neighbours whose compasses swing between concerned, confronted, confused and confounded.

On the express request of Lally Katz, and according to their licensing, Illuminate Educate are performing a revised edition of NEIGHBOURHOOD WATCH that includes some edits and some character names have been altered.

Nevertheless, this production, primarily presented for pupils studying this prescribed text, skilfully and clearly encapsulates the body and spirit of the play, traversing the tragedy of the past and triumphantly entering into the optimism of the future.

A Monkey Baa Theatre Company presentation of an Illuminate Educate production, Lally Katz’s NEIGHBOURHOOD WATCH is playing the Lendlease Darling Quarter Theatre, known as the Monkey Baa Theatre, between the 19th and the 24th July.