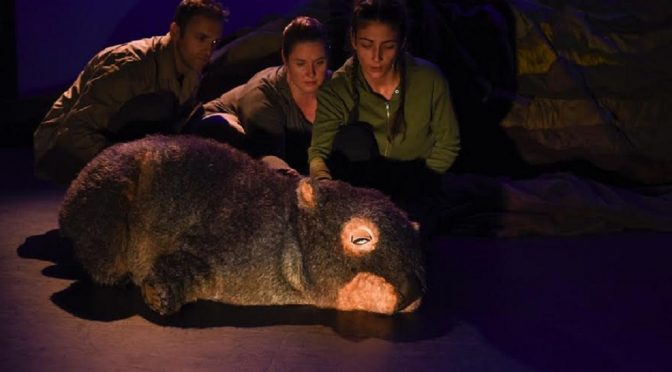 Jackie French’s book Diary of a Wombat bounded boldly into Australian family life in 2002. It nestled itself with a unique exclamation into thousands of young Australians’ bedroom bookshelves. Who better exists in children’s theatre circles than director Eva Di Cesare and the insightful Monkey Baa team to respectfully transform this classic to the stage for the 3+age group?

In doing so the Monkey Baa creatives and assembled performers ensure this age group and the rest of us appreciate the possibilities of a live performance medium to portray this character rather than film or one of many modern electronic alternatives.

For children and adults making the trip to the Lendlease Darling Quarter Theatre, Mothball The Wombat’s innocence, flatulence, curiosity and daily insatiable urge for experimentation with human food are delightfully captured in the action. Through the use of 3D plush puppets manipulated by visible on-stage puppeteers, Bruce Whatley’s fine book illustrations of Mothball’s tirade are greatly enhanced.

The concept team of Sandra Eldridge, Tim McGarry and Eva di Cesare have maintained the book’s punctuation of action into days of the week, with the flow of the wombat’s destruction of the human house and yard also very similar. Imogen Ross’ set construction allows for props to be stored behind a fabric covered multi-functional mound.

A small wombat enters to depict distance from this part of the set and returns to this structure after the daily travels. This is not a very deep part of the stage but the illusion of travel with a small puppet mostly holds firm.

It is however the spectacular entry of the comparatively giant, close-up and centre-stage Mothball which is the obvious favourite with the young audience. She emerges full of character and often at a heavy gallop from around the set structure or burrows up through a soil like gauze for a dazzling, spirited reveal.

The book’s emphasis on this native animal sleeping, scratching and cheekily looking slowly about is captured with great effect through the dexterity of up to all three stage performers at times.

The portrayal of the humans succeeds due to its expressive and concise caricature, around and inside an effective set component resembling a front door. This version thankfully resists the temptation to stray from French’s text to introduce extensive extra dialogue.

Stage performers Michael Cullen with Shondelle Pratt (puppetry and human characters) as well as Julia Ohannssian (puppetry and sound effects) have been well directed to manage multiple stage tasks. Their combined movements to create Mothball are lithe but deliberate.

This approach to puppetry very effectively recreates accurate animal behaviours and physical tics. At no time does it feel hurried or time-poor. An eclectic soundtrack by Oonagh Sherrard features terrific variety.

Cellist Mary Rapp, seated onstage amidst the action, skilfully accompanies Mothball’s escapades with an atmospheric layer which combines composed music, dramatic modern string effects and even catchy riffs or rhythm guitar like barre chord strumming. This gives the wombat star an exquisite voice which is totally appropriate for all aspects of Mothball’s joie de vivre. Personality traits from the laid back to hectic are covered musically.

Such a well-known book in international literary circles would be a challenge to bring to life for any company. Here, however, it is successful in a 3D stage version using the challenging medium of puppetry. For all ages assembled it is funny and energetic and deliciously larger than our human lives.

DIARY OF A WOMBAT plays at Lendlease Darling Quarter Theatre from April 18 to May 27. It also tours nationally from now until November 7.