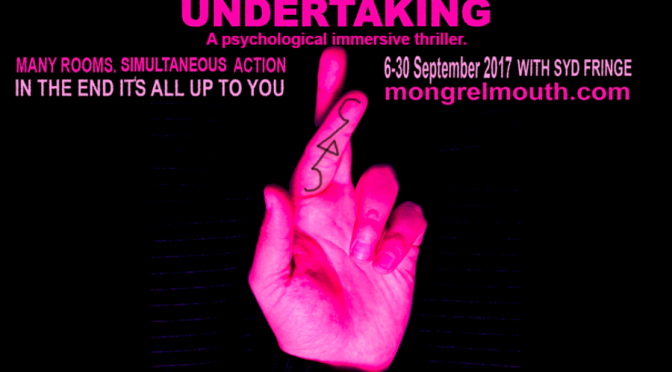 “In my own life I would have fucken pushed him!” It was like Lord of the Flies there at the end! Yet, eavesdropping in the lift on the way out, I also heard … “Guys. OMG we just let it happen!.’

Mongrel Mouth Theatre Company creates immersive theatre and they are damned good at it. UNDERTAKING is not their usual richly detailed and finely written work though. It is different: fringier; grungier; more explosive.

In previous productions one’s experience might have been narrative and intellectual. This is much more visceral. Not that it’s mindless or unchallenging; our host describes the show as “clever and curious”. It’s not scary either … until you get out and have to face what you have learned about yourself. Or others…

My companion and I have been friends for years, we are both theatrephiles and have seen 3 shows together this week. But we learned last night what we really have in common: we swim on the edge of the shoal. UNDERTAKING is in a big space which has been grunge-ily pimped and the participants wander, exploring and gathering clues. She and I are both loiterers, lurkers in dark places on a private mission away from the crowd. Private problem solvers. And we both missed stuff!

Like when the big emotions hit as the cast edge the story into consciousness. It’s a shocking beginning and one simply does not know who to trust. One creepy woman was really weirding me out. She wasn’t a cast member but another edge dweller like me who was never going to desire The Conch. And people who I thought were cast just downright lied to us! Brilliant improvisers they explode and confuse and obfuscate and then have the cheek to ask when something happens, “Haven’t you been paying attention?” The usual brilliant Mongrel Mouth immersion improvisation skill and timing.

Attention is your best weapon in UNDERTAKING but the group I was with had an unsettling conclusion to the event, we didn’t solve the mystery I don’t think. It’s hard to tell for sure. Chatting with the box office staff as I was getting our tickets to another show, they had experienced a entirely different outcome when they had seen it the night before. “Tickle him till he tells us!”

It was a large audience group at my viewing but not so large that I couldn’t escape into one of the many side rooms in my search for clues. I was on a mission related to an incredibly misperceived observation when a nice man asked me what I thought. I explained my sorry-ass theory and he joined my posse. Later in the carpark de-brief his “I liked where your head was at” made me feel less … something. Because UNDERTAKING confuses whole chunks of your brain and takes your feelings on the ride with it.

Also debriefing in car park was a bunch of young people. “I said don’t do it”; “But you didn’t actually do anything about it”; “Your actions affect all”; “But she said no so that means that she did.” There were obviously recriminations and reflections. We waited over half an hour for the other show we were going to and they were still at it!

And that’s the point. Immersive theatre at its best gives insight and a moral challenge to the participants. UNDERTAKING is set in an abandoned office building rather than a remote island but the dynamics of mass appeal, max fun and mere humanity are designed for an experience that requires a reflective argument into the night.

UNDERTAKING by Mongrel Mouth is playing as part of the Sydney Fringe until 30th September.