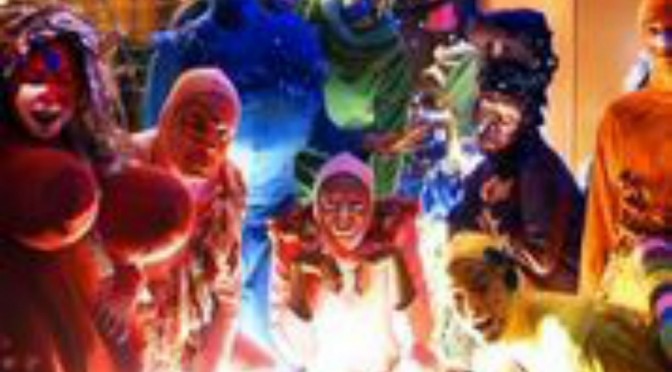 It is difficult to ascertain a name in this situation. The patient is some kind of performance collective and refers to itself as LIKE ME. This is the pseudonym used for this document. The group is identified only by the colour which they have painted their faces. 9 entities identifiable.

Background to the Current Situation:

This group of ex patients has returned to the Treatment Centre and are treating the derelict building as their home. Nightly they are seducing ‘normal’ people into the bizarre and frenetic goings on in order to create some kind of cathartic healing.

Spreading themselves over the 8 rooms of the decaying dystopia they have illegally accessed the electricity to fire up the discarded LCD desktop screens to light the spaces. These screens have had their liquid manipulated into shapes and forms which are repeated and reflected in each of the sleeping quarters.

They have created a coding room and a healing room and a repetitive, incendiary, bubble fueled throne to which many of the patients aspire and the detonation is a signal for the creatures to explode up the stairs to huddle together.

This Hive Mind is the issue to be addressed.

It is obvious that the interaction with technology has deformed and twisted these inmates into shapes which reflect their inner turmoil. Obsessed by the detritus of electronica they pile up discarded computers, take obsessive selfies and search for the elusive and unattainable ‘Mnumum’.

When alert, there is some evidence of intelligible English but alliterative plosive sounds and grunts combine with pointing and nudging and imploring provide the main identifiable communication. They have seconded bar code scanners with bells as jesters’ staffs to indicate their emotional outpourings.

Previous clinical notes suggest that there has been successful use of straightjackets in the past and each of the nine is encased in a head to toe coloured suit which seems to give them comfort. The outfits serve to exacerbate the grotesque nature of the external excesses that overuse of technology has wrought. The neck goitre of the pathetic green being is clear evidence of mobile phone tumours. None of the creatures are unafflicted.

There may be a more lucid patient, Poopop, (red and purple face paint, red suit) who appears to understand the group’s technology inspired psychosis. This inmate encourages stroking and petting as a calmative. The group are only inactive when curled up asleep together like puppies.

After spending the evening in this perverse mayhem it is my strong conviction that human contact is the only evident course of action for these poor demented creatures. I suggest that strong minded normals with an ability to stay sane under provoking circumstances sign up to attend at http://mongrelmouth.com/tickets/

With your help we may be able to encourage LIKE ME back to wellness by July 11 when they will be forcibly evicted.